August 09, 2018
Well, my son turns 20 today, which I think officially makes me old. I tell people that there are days where I barely feel twenty, but they are usually followed by days where I feel 65. So, I guess that's a trade off.

Having just met my nephew's first son, Roy James a day after his birth, I was reminded of my own son's birth. A hot, hot day in August of  '98 we went to the hospital early in the morning. His birth was fairly routine - no complications to speak of with one small exception. When he was delivered, the umbilical cord was wrapped around his neck. As a result, he was whisked away to neo-natal ICU immediately after I cut the cord.

This made for some very anxious moments. I remember talking to my mom on the phone right before it happened and when they said they were taking him to ICU, I sort of freaked out. It was a precautionary measure for sure, but one that made me very uneasy. The thought of losing a child was frightening and unsettling.

It turned out okay and within a couple of hours we could see him again.

Over the years I've watched him grow from a 3 year old with a buzz cut to an awkward middle schooler to a mature high schooler. The past couple days he's been camping with some of his high school buddies at Devil's Lake. I'd like to think that all the times we took him camping might have had a role in helping him to enjoy the great outdoors. I also hope it is the start of a lifetime love with being in the woods and enjoying the get away experience it brings.

This past weekend we moved my daughter into her first real post-school apartment. Just today I was thinking how real it is getting that she will likely never live with us again. It was a seamless transition out of the house, with nary a blip on the difficulty scale. Like my own mother's policy, she is welcome to come back and live with us if she needs to...once. That was a credo that mom honored and we all took advantage of, for the most part, with the exception of my sister Jane. 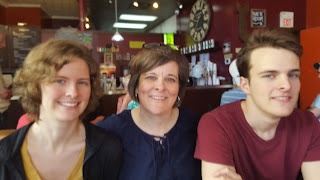 Next week he will move back to Madison into a new apartment that has a year round lease. There is a slight possibility that he may never move back in again, which is even weirder yet. I am not sure I am ready to say goodbye just yet.

But I realize kids grow up, and now he's 20. I can safely say my 20's were some of the best years of my life. He's making his own life with his friends and I am confident that there will be lots more great moments with him and my daughter in our future.

Like a sign with a Dr. Seuss quote reads in my step-sister's house, "Don't cry because it's over, smile because it happened."

And I guess that will have to do.