Leaning Into The Tape

April 25, 2019
Today marks the twenty fifth day of my National Poetry Writing Month challenge of a writing poem a day. I'd like to say I'm energized and ready to finish strong, but that would be a lie. The theme for these poems is Fatherhood and while it's not been easy, it is nearing the end and it has revealed much.

It probably doesn't help that I started a week ahead of time in fear of having to miss some days. So technically I have about 32 poems already, but I am determined to finish out the month. The challenge was for April, I do April. 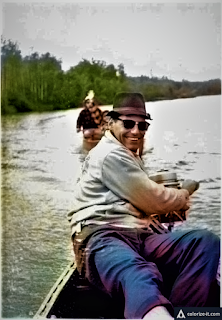 What I like best about the challenge is not knowing what each day's work will bring. Some days are just "meh," producing poems that are just average. But every third day or so, I get a poem that, by my standards, I can hardly believe I've written it. Really, really good. You've got to break a lot of rock to find the gold I guess.

The pressure to create every day, regardless of how tired I am, how busy or how non-creative I'm feeling is a LOT like working out after work. But in some ways, working out is easier because it involves my body and not my mind. At the same time, I've become better at it as I've gone. It has pushed me to try new styles, to mix it up between humor and heart, and to change it up between long and short.

I've branched out into Father in-law, Stepfather, Godfather and, of course, lots of my own fatherhood experience. The variety has kept my work fresh and as I said, it has revealed things about each of those roles. I've had poems that were happy, angry, sad, introspective, hilarious and playful. It has dredged up emotions from my childhood about each of my fathers and in some ways, was therapeutic. Almost like talking to my dad(s) at times. I seriously don't know what each session is going to turn out.

As I mentioned, at the end of the challenge, we are invited to submit our collection of 30 poems back to Local Gems Press and from those submissions they will choose a winner for publication and two $100 runner-up winners. I can't wait to step back and look at the collective body of work and organize it for submission. My intent all along is to submit it to other presses if it doesn't pass muster at Local Gems. I think the subject matter is appealing enough for some to warrant a look. But, I've been wrong before.

So that is my April angst at the moment. It is a love/hate affair, but one I'm determined to finish out. No one stops running a marathon at the 22nd mile.

Because if there's one thing this father is, it's disciplined.