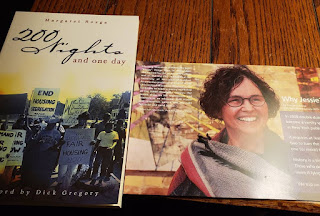 It is a month that is designed to increase the exposure to and awareness of poetry and it's impact in our world and our culture. There have been a number of events around town, some of which I've been able to attend, some not. There were a couple of events this week that were interesting and inspiring.

The first was a reading by Wisconsin's poet laureate, Margaret Rozga at the New Berlin Public Library. I've gotten to know Peggy over the last few years as we've run into each other through our poetry circles. She and I sit on the Southeast Wisconsin Festival of Books planning committee, so I've seen more of her lately. 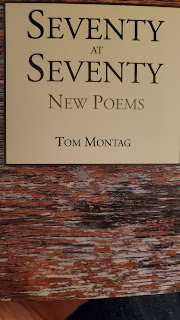 For those who don't know, she was very involved with the Fair Housing Marches that happened in Milwaukee in the late 1960's. These were racially tense times in the city and along with Father Groppi they marched for racial justice, the inspiration for her poetry book, 200 Nights and One Day. James Groppi later left the priesthood and the two married and raised their family.

Her readings were from her new book, Pestiferous Questions, which is historically based as well. Part of her presentation involved soliciting one line per person from the audience to form the basis for a collaborative poem on her theme of Opening Doors. I thought this was a cool exercise to engage the audience in something creative.

Then, last night I was at Mama D's for the monthly poetry night. This one featured Tom Montag, a prolific poet from Fairwater, Wisconsin. Tom has published too many books to count with his most recent book, Seventy At Seventy. I'd only known Tom from Facebook, although he was a gracious contributor to the signed poetry book solicitation I did earlier this year for Kettle Moraine High School as one of my poet laureate initiatives.

Anyway, I am so glad I got to hear some of his work and have come to appreciate his style and stage presence. His words are minimalist but impactful. He is an approachable guy with a list of credits that include having one of his poems inscribed in the Milwaukee Convention Center. It was a great night.

I continue to write a poem a day as part of my National Poetry Writing Month (NaPoWriMo) challenge. My theme is on fatherhood and as I mentioned, it has been both challenging and revealing. I never know what is going to happen from day to day, but it appears to be all good.

And finally, I found out my forthcoming poetry collection, Thoughts From A Line At The DMV, is due to be released this October, which is about as exciting as it gets!

So, I would challenge you to check a book of poetry out of the library this month. Many people say "Poetry is not for me," to which I say there is something for everyone. You can find mine here.