June 23, 2019
I have enjoyed biking pretty much my whole life. Ever since my sister Pat taught me how when I was seven or eight, I've always liked the sense of freedom and wandering that a bike provided. I've written short stories and poems centered around the pleasure of pushing pedals.

My first bike was a gold stingray knock-off that my mom got at a Super America gas station, I think. I loved the bike with its 20 inch tires, metallic gold flecked paint and a banana seat. Unfortunately, a year or so after I got it someone stole it virtually right in front of me. A couple of teenagers were walking down the street, one on a bike, one not. The one walking just hopped on my bike while I was playing in the yard and they both sped off. It was an early lesson in how people are capable of brazen theft and meanness. 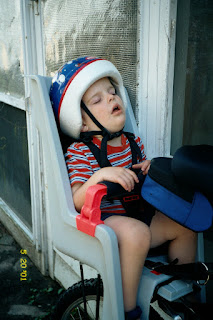 A couple of years later, I got a much bigger bike, a 26" 3 speed Huffy. It was a big, geeky bike that I made geekier by adding a battery operated headlight, odometer and a flag to the back. I was always jealous of other kids' cool bikes, but Mom always said, rightfully so, that I was too big for a bike like that. This was a much better fit.

Ever since those days I have owned a bike of one vintage or another. I've also owned a heavy lock as well. One doesn't make that mistake twice in a lifetime.

My current bike is a Trek mountain bike that I have grown to love. However, I am beyond the years where a lot of trail-crashing off roading seems appealing. I think if I were to get another bike, it would be a cross-bike - a hybrid between a mountain bike and a road bike. Get me to work and out on the paved trail, but keep me in an upright riding posture as well.

Today I went down and watched a little of the bike races in downtown Waukesha. It is a sport I enjoy watching but never aspired to do. I am not a group rider. I am not a team rider. I ride alone and I ride to be alone. I told some friends once, I don't even like to say "On your left," when passing a rider. I ride to think, to be introspective and to relax. Having someone pacing me or cheering me on is not what I need. Different strokes for different folks I guess. 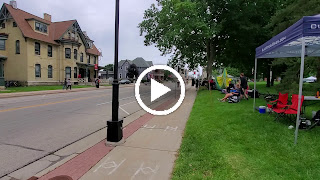 But watching these guys gave me an appreciation for all the training and discipline they have to partake in. It's a grueling sport of speed and finesse and position. I give them credit, they're better people than me.

And I'm okay with my 10 mile rides after work. It keeps me sane.

Jo Balistreri said…
Really enjoyed reading about your love of bikes, of riding alone to be alone—yes, yes, and yes!