Rebel Without A Bike 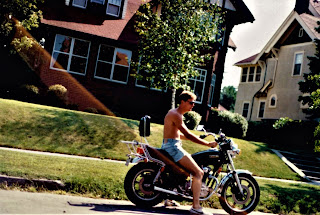 A buddy of mine recently joined a motorcycle gang. Well, it's not what you think. The gang is titled Rebels On A Mission (ROAM). The group is centered around advocating for kids that have been bullied. I didn't get to talk to him at great length about it, but it sounds like they seek out kids that have been bullied or physically abused in school or at home.  Then they will do things like escort them to school on their motorcycles or other protective things.

They recently had a call for a used (pedal) bike donation so they could give away bikes to inner city youth at an event later in June.

It is a great cause, but it got me thinking about a motorcycle again. My brother recently sold his Harley Davidson, and so the subject keeps coming up. I used to ride a lifetime ago, though my bikes were all small, Japanese things, Hondas and Yamahas.

And while I haven't ridden in years, I won't go so far as to say I'll never ride again. I used to REALLY love the feeling of freedom I had on a bike, the wind in my hair, when I had it. Yes, I know they're dangerous. I still stand by the argument that anyone who says, they won't ride because it's dangerous has probably never experienced the exhilaration of riding one. Because there are some dangerous things in a lot of things we do, one just has to weigh the price.

A few of my old friends still ride. One who used to own a Japanese bike back in the day finally  bought a Harley that he'd always wanted about 10 years ago. I give him credit for following through. And while I don't necessarily have to have a Harley, I would consider a large imported bike or maybe an Indian or Victory motorcycle.

Of course any pursuit of that aging dream will probably have to wait until I retire. There's still too much on the line to risk it.

But there are days when it sure would feel good.
harley davidson honda ROAM Yamaha