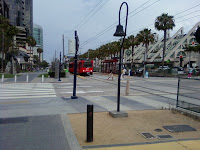 Travelling by air is not what it once was. As my wife put it, it's more like riding a flying bus, than the luxury it once was. Actually, given the choice, I'd take four hours on a bus before I'd take a plane. On a recent trio to San Diego, (Left) I had the pleasure of flying AirTran twice in a week.
It all starts at the check-in gate, where you wait in line and kick your luggage until you get to the front where you show your ticket, license, birth certificate, library card, credit history, sexual preference, religious affiliation, political party, cute baby picture, passport, driving record and favorite color. Then they take your money and weigh your bag.
You move along the moo-chain to the security TSA check where you say goodbye to your bag and hope that your underwear weren't on top.
From there, you move to the security check where you again show all your credentials, plus any that you may have accumulated since you last showed them. After giving you a good looking over and scribbling some non-descript meaningless initials on your ticket, you move on to the disrobing area. There you put everything except your shorts and t-shirt into a plastic bin and walk through a metal detector, while your personal effects undergo a good blasting of radioactivity in the name of airport security.
If you're lucky and the sun and moon are aligned, you pass go and do not collect $200. You then move to the "Recombobulation area" (I kid you not, it's really called that in the Milwaukee Airport,) where you hurriedly re-dress yourself and store away your now radioactive effects. You do this all in a matter of 3 minutes and you come away feeling that you'd just been probed by aliens and and put back in line. Seriously, you end up looking like Steve Martin in The Jerk

Then you wait for the hour and a half as part of the two hour lead-time that they tell you to get to the airport. This wait period entails uncomfortable chairs with bored people eating pizza out of their laps, checking their phones or reading.
When you're called, your credentials are checked another time before boarding to make sure you don't try and pull a fast one before boarding the plane.
Once aboard the too small plane, you find your appointed torture chair and the fun really begins.
If you're over 5 foot 7, you can appreciate how uncomfortable those seats really are. At one point yesterday, the flight attendant was tending to the woman across the aisle and her posterior is bumping my shoulder repeatedly. Finally she realized it wasn't a chair back and turned and said "I'm sorry, honey".

It was just a little bit too intimate there for a while, in an uncomfortable way. But that is the nature of our airlines. The aisles are too narrow, the seats are too close together and too narrow. If you don't mind rubbing elbows, quite literally, with complete strangers for hours on end, then flying is the perfect thing for you.

Throw into that mix screaming kids, bad air, popping ears, and endless delays, and you have a good old fashioned pain party. Me? I got lucky and got to sit next to a lunatic 50-something woman who talked to her neighbor in the window seat (whom she did not know) for TWO HOURS about the pros and cons of their stupid cell phones. She had a droid and he an iPhone. Two hours!

Now I'm a big technology guy. I've got a phone that takes pictures and texts and would even surf the web if I wanted to fork over the dough. I've got a laptop an Wii, an HD TV, an Ipod Nano, and a GPS. But two hours? I get tired talking about something interesting for two hours. I kept thinking there's people in Haiti living in tented squalor, and here we (not me) sit talking about how our 16 GB phone has enough music on it to walk around the globe and never hear the same song twice. The guy actually said that. The funny thing is, it impressed the woman.

As David Letterman says, "It's no wonder everyone hates us."

Finally, when it came time to land, the two year old in the seat across the aisle decided he didn't want to sit in the seat, buckled in. When the irate flight attendants kept reminding frazzled mother that she needed to buckle him in, she almost said "You do it, then!" I guess I wouldn't have blamed her. She ended up with the kid in her arms looking out the window.

I thought this was an especially poignant moment for the whole flight. Had the plane crash landed and everyone perish, at least this mother would die holding her 2 year old in her arms, rather than him screaming alone in his seat. A morbid thought indeed, and thank goodness we landed safely, but I thought sometimes stupid rules should be allowed to be broken when their inanity becomes so blatantly obvious that even casual lookers-on agree that they're stupid.

And all of this is why I look at flying as a quick means to get from A to B. As my co-worker said before we left, "Have a good flight".

To which I said, "Now there's an oxymoron."

She replied "Oh yeah. Have an adequate flight, then."

And adequate it was.