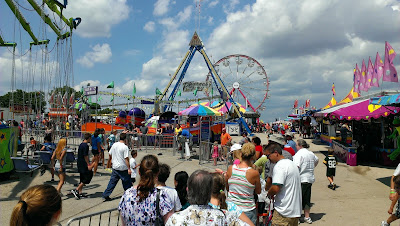 I took Ben to the Waukesha County Fair today as part of the County Employee picnic. We get free admission and lunch, so I try and make it when we can as it's a chance to get my fill of fair food in case I don't make it to the State Fair. I love corn dogs, mini donuts, fried cheese curds and creme puffs the best. Today after the county sponsored lunch, all I was able to cram in was a bag of mini donuts. They were deliciously bad for me and Ben and I ate them all.

Fairs, carnivals, and festivals whether at the State, County, Town, or Parish level, have always been a blend of heaven and hell for me. They represent both good and evil all rolled into one, then deep fried and put on a stick.

Why the hell tie-in? Have you ever been to a Midway? Most of these games are rigged or slanted so far in the favor of the vendors that it's easier to just give your money to the attendant and keep walking. These men and women are after one thing, and it's surely not the unbridled joy of your child's face as they walk away with a four foot tall stuffed Homer Simpson doll. They want your money and would likely take your soul if it meant they'd make a buck in the process.

One year we went to the county fair and my daughter (about 9 at the time) wanted to play some games. We gave her a five dollar bill and set her free. She came back in tears a few minutes later. Rather than trying a few different games, the swindler at one particular game had sweet talked her into trying a game 3 times for $5.00. Of course she failed and ended up blowing $5.00 in 30 seconds. She was distraught and got a good taste of the corruption and greed known as the Midway. As bad as it was, it was a great life lesson for her. It taught her that as good as some people seem, appearances can be deceiving. That as easy as some things appear, there's no free lunch.

Ben tried his luck at the "Shoot out the star" BB gun game, a favorite of his. He tried it twice and lo and behold, he was unable to completely shoot out the star. We joked afterward that they put oil on the BB's so they take on an erratic path of their own after being fired. Either that or the barrel rotates slightly after every shot, so that even a marksman looks like a fool. Neither would surprise me. He has a healthy mistrust for everything in the midway and, in that respect, I think I've done good.

I don't mean to demonize the whole fair, or even the Midway. As I said, I love the fair. I no longer waste my time trying to break bottles with baseballs, but that doesn't mean I don't get a charge out of walking the aisles amidst the buzzing buzzers, flashing lights, dinging bells and popping balloons. To me it's the spectacle of the experience that is so cool. It's like being in hell, but not taking part in the sin that got me there.

The heavenly part of the fair is everything else. I love walking through the animal barns. Being raised a city-boy, I always get a kick out of seeing the goats, the sheep and the piggies. It's funny because the people I know who were raised on farms, have nowhere near the zeal for the animal barns as I do. Today Ben and I saw a cow that must have been 1200 pounds. (That's a guess.) It was beastly large. Fascinating stuff for a city-boy. 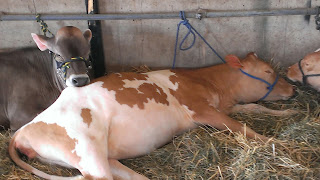 I love the food, as I said. Almost all of it is bad for you and that's why many people go. They can't get some of it any other time and you check all of your dietary limitations at the gate when you walk in. This is not always a good thing for people, but at the fair, no one cares. It's heavenly food taken with hellish decadence. 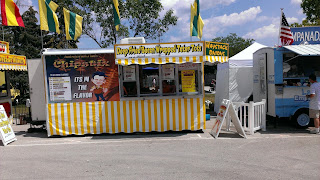 The exhibits are cool too. Who doesn't want to see a potato peeler that doubles as a lawn-sprinkler, a shampoo that also unclogs drains, or a lawnmower that can be converted to a vacuum?

We went to the "demolition derby today and were disappointed to find out it was only lawn tractors. It was cool, but a bit of a letdown. Well, when we were ready to leave, it seems they were lining up "the big boys," namely full sized cars. We stuck around to watch and it was so, so cool. It was redneck, Americana cool. These cars had some horsepower to them and were giving it all. Ben and I got sucked into the noise, the exhaust and the power of it all. It's such a boy/man adrenaline thing and it was amazing. One car had it's wheel knocked off and still drove around on the drum for a while. (All in the name of a $700 winner's purse.) It was a moment between us that I'm glad we shared. Stupid, reckless, mindless fun. Heaven and hell all rolled together in 3 wrecks.

It epitomizes everything that is right and wrong with the fair, and I love all of it.