July 17, 2013
I spent the day sailing on Lake Michigan yesterday with my wife and some good friends. It was a 23' vessel and had 2 sails. Our "captain" was a ruggedized 70+ year old lady named Donna. She reminded me of my mom both in looks and attitude. She said she'd taken up sailing at age 40 as a "bucket list" thing, and had been doing it ever since. She has the best job in the world, of that she's convinced, and I tend to agree. Again it was the case of a septuagenarian showing me how life should really be lived. I want to be leading people on adventures at 70+, or learning guitar, or rock climbing, or... 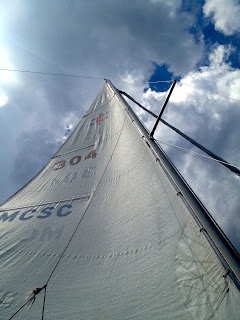 Anyhow being on the water reminded me just how drawn to water based fun I am. I have always liked being on the water, usually fishing but, really, put me in or on anything that floats and I'm in. The ironic thing about my love of water is that I am not a terribly strong swimmer. I can hold my own and tread water with the best of them, but never really learned how to swim with controlled breathing, etc. 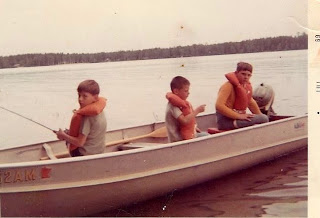 Above is one of the earliest pictures of me in a boat (in front) with a couple of my brothers in Hibbing, MN in 1969. (Safety First!) I remember this outing like it was yesterday. Rob and I both caught Northerns, mine got off at the edge of the boat, so Tom let me use the one he caught in a picture that we took after we landed. It's funny what sticks with you over time.

Motor boats were always nice, but we did our share of boating using our own power in a canoe or rowboat in order to get fish. One of my earliest recollections of canoeing was on the Mississippi River with my brother Tom and one of the others. It was my first lesson in taking heat from the back of the boat, as Tom told me to "put your shoulder into it". This continued as a practice that carried on for many years as we all plied the waters of northern Minnesota in canoes, at times bickering at the effort of the other. 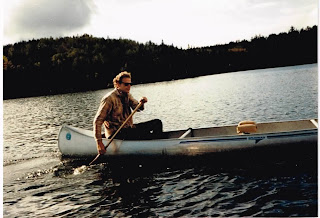 I discuss these control battles at length in my forthcoming memoir. An empty canoe, by design, is efficient. But when you add two large adults, a bunch of gear and a nice crosswind, well, lets just say I understand where the phrase curse like a sailor comes from.

When I'm in the back of the boat, my philosophy (right or wrong) is to try and power through a wind shift in order to maintain our momentum. This differs from whoever I'm sharing the boat with when they're in the back. My thought is that they look at the back as a chance to take it easy, using the time to do a lot of ruddering and an occasional stroke here and there for good measure. This is largely an unjustified perception, I'm sure, but that is how it feels from the front. Since I can't see what they're doing back there, they must be loafing.

For a few years when I was in my early college days, a friend of mine had a really nice speedboat. He took us water skiing and tubing on many occasions. I got to be pretty good and was even able to drop a ski and slalom pretty well. The ultimate of course was getting up on one ski, thereby eliminating the need to drop and track a second ski. It also meant "eating water" where when you said "hit it", you ended up with the equivalent of a fire hose to the face for about 20 yards or so until you planed out and got on top of the wake. It was always a near-drowning, but hey, if you wanted to be considered "elite" you had to take your lumps, or swallow your gallons.

The same friend had a Sunflower sailboat and we took it out a couple of times with another friend who had his own sit-on-top wooden sailboat that he had "refinished." It turns out the refinish job neglected a small leak, so the thing took on water and, over time became top heavy. This resulted in multiple dunkings and an almost unsailable sailboat when the body of it became inundated. I'll forever remember it getting "righted" on Owasso Lake and when it came up, there was a big tangle of seaweed hanging from the mast. Ah, yes, nothing attracts the babes like a wet sailor with a seaweedy mast. "Could you throw me a lifeline, here?"

I was glad I was looking manly and dry in my Sunflower. 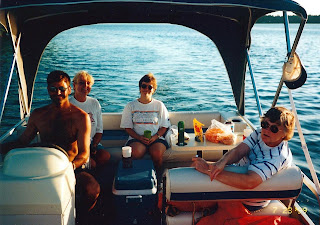 Of course there's always the party barge for the not-so-adventurous trips on the water. Virtually untippable and unsinkable, these vessels are king of the water. They are slow moving and they turn like a Mississippi river barge. They can be fun in their own rite, but are a little like trying to get respect on the road by driving a Taurus Wagon. Functional, yes, fashionable, um, no. At the same time, you can stretch your legs without kicking the anchor or a fishing rod, and where else can you make your lunch and listen to a stereo all on board.

There is a place and time for each of these boats. There's also a place for an inner tube or a Stand Up Paddle board. I love them all, and they're all part of my "happy place". I can't wait to get back into one.