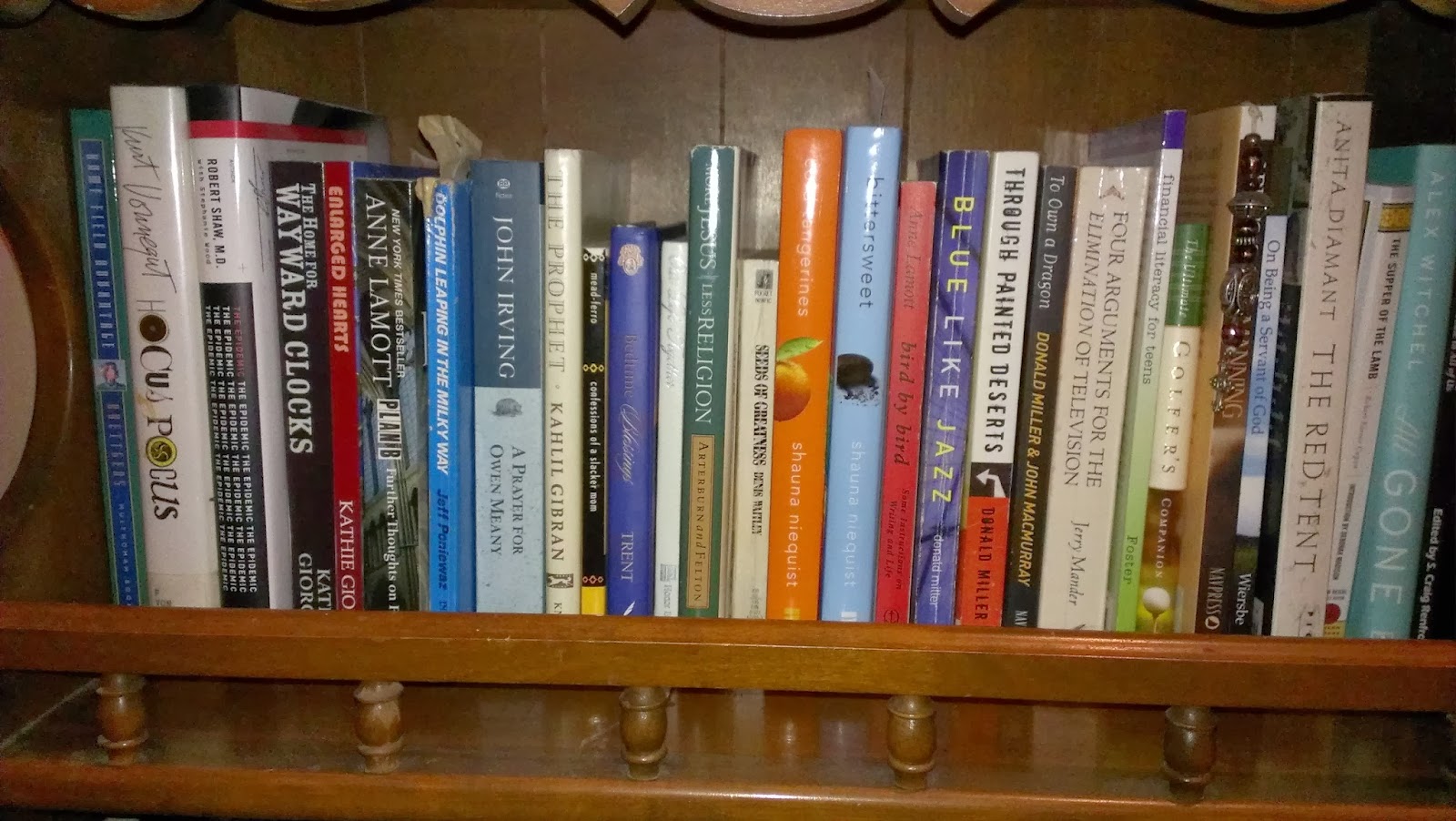 I went looking for a book today and ended up finding it in our upstairs bookcase. The photo above is but one shelf of the two shelf bookcase - which came from the house I grew up in in St. Paul, Minnesota. Now before you judge us on having such a small book collection, let me explain.

If you know my wife and I, we are voracious readers - she more than me, but I do alright. We have a stack of books by our nightstand constantly. (Ironically enough, as I write this at 8:30 on a Saturday night, she is up in bed...reading. What else to do on a February night?) Right now, I have three books up there, From the Top, by Michael Perry, The Sex Lives of Cannibals by J. Marten Troost and the Hawks of Sorga, by Summer Hanford. These three books are resting on top of a Sun Magazine, a Verse Wisconsin Poetry Magazine and a Bible. Sex Lives is finished, From the Top is in progress, Hawks is pending and Bible is ongoing forever.

Finished, in the works, on deck. I've read, I'm reading, I will be reading more.

This is how I love to live my life. Unfortunately, with a full time job, a wife, two kids, a ninety year-old house, a dog, two cats and a need to write, I don't get near the time to read that I would like. We have a friend who some Saturdays will spend nearly the whole day reading a book. There was a time in 1992 when Donna or I may have been able to do that. There hasn't been one since.

If I manage to squeeze in 45 minutes at night before bed, I'm doing pretty well. It is my biggest regret, lately. I'm not a terribly fast reader, so I don't churn through books like my wife, who devours them like popcorn. I have a list as long as my arm of things I want to read, yet may never get to.

Anyhow, the small bookcase is somewhat intentional. After we were nearly buried in books a few years back, we decided we had to do something. We packed up all but the "classics and keepers" and put them in a Rubbermaid totes down in the basement.

Do I feel horrible about those poor authors sitting in the basement? Yes, I do.

At the same time, I know where to go to visit them, if I must. It is not a slight against them, it's just that we realized that we were unlikely to pick them up and read them again. If we do, we'll go get them.

The ones on the bookshelf however are exceptions. They are the books of impact and that hold intrinsic value for one reason or another. A quick rundown of a few of them and why they hold significance for me.

So that is my rundown. In my next life, I'll own a house the size of Buckingham Palace and it will have a library with thousands of books. Until then, I'll keep tipping over the stack on my nightstand and visiting the Rubbermaid totes in the basement.

Author Kelly Risser said…
I love The Red Tent, but your comment made me laugh out loud. During parts of that book I cried so much I couldn't see the page anymore. Such a good read. As always, love your sense of humor, Jim! :-)
February 2, 2014 at 10:33 AM

Jim Landwehr said…
Pat: That is funny that you remember the true origin of that bookshelf. I remember mom having books of those Gold Bond stamps. Kelly, my wife said Red Tent is a great book...but may be a bit heavy for men. After hearing the storyline cliffs notes, I tend to agree. ;-)
February 3, 2014 at 6:22 PM