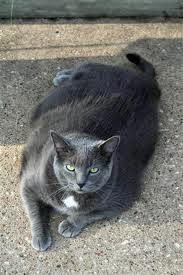 Today my short memoir Fat Cat came online at the Neutrons Protons online magazine site. It is a story about a stray cat we took into our home when I was just a kid. Like many of our pets, Fat Cat wasn't sure what he was getting into when he came into in our house of 6 kids. Most of the cats we had were tom cats, left to roam the city streets at night at will, to fight, chase females and return home only when they needed rest, food or medical attention.

I am not proud of this heritage. Unfortunately, it is a done deal and, as I allude to in one of my pet stories, since many of our pets came to us as strays, we were providing them with a better life than they were leaving. Besides, it was a bit like trying to tame a stallion. Once a stray, it was in their nature to roam. They had a travellin' bone and you couldn't break them of it. It was like they agreed to live with us, but it was on their terms.

"Okay, I'll give you love and affection, but I want 3 squares a day and no curfew. Oh, and none of that dry food crap either. I prefer canned food, but at a minimum Tender Vittles."

So we caved to their demands and it worked out pretty good. (Except for Fat Cat, obviously). Some of the strays ended up being very good, long term pets. Some others stayed only a short time and moved on. I shouldn't say all of our pets were strays. We bought a few cats over the years too. They were not much better though, still left to roam, and tom and cavort.

We were a little choosier about dogs. Most of our dogs were rescued from the humane society or purchased from friends. Lance was the German Shepherd evil incarnate. (I just had a poem about him and his chewing habits accepted for publication.) He chewed shoes, carpet, furniture, anything. He was a big, strong dog. I once took him out for a walk and he started running and pulling me along. I don't recall what I was looking at, but he ran me straight into a light pole. I dropped the leash and he took off running. We chased him around the neighborhood for the next hour until he was corralled.

He met his demise when, one day, someone let him out the front door and he took off running and never came back. When they did this, I was never quite sure if it was because it was in their nature, or they just compared life on the road to life with six kids and said "Nah, I'll chance it on the road."

Can't say I blame them for that.

Lots more pet stories have come to light in my writings for the Portland Avenue book. Stories about the best dog we ever had (Pumpkin) and the worst dog (Baby, doomed from the start with a bad name) and everything in-between. Stories of a bird let out of their cage to fend for themselves against our cat (a neighbor did this, we think) snake escapes, pregnant mice and more. Again, you'll have to wait for that book to hear the gory details. That one may be a couple of years out though. Unless I come into a windfall of money and am afforded the luxury of writing full time. If you'd like to sponsor me, gimme a call.

Until then, I'll keep my day job and make sure the cats and dog stay indoors.