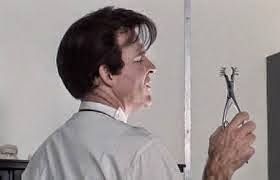 I visited the godforsaken dentist this week. You know, I try and try, and I'm 52 years old and I should be over this now, but I really, really, really hate the dentist. I tell people that I'd 10 times rather go to the doctor than the dentist.

So anyway, my hygenist asks me if my I'm having any problems with my teeth. I lie and say no, because, lying helps, right? I've been obsessed with a "sharp spot" on one of my teeth ever since my last visit - it feels like a tooth that's about to crack. But as I see it, if I tell them, they'll want to:

Then she tells me it's been a while since I've had X-Rays, so she layers me in lead and then makes me bite on these new "bite wings" that hurt and are more uncomfortable than the old paper ones they used to use while she takes what seems like a picture of each tooth in my mouth both in portrait and landscape mode. I figure I got enough radiation in my to last a while. It's weird how I haven't needed to charge my phone ever since the appointment, either. And I don't have to turn on the light when I go to the bathroom at night either.

Next she and her "shadowing intern" take out the clinking dental picks and weapons of inhuman torture and start scraping and poking and making a racket in my cranium that sounds like she's trying to start a fire with flint and steel in there, or something. When she reaches a particularly obsessive spot, I see her intern peek around the corner, looking like, "Oh, that's an interesting section of plaque, right there!"

When the hygienist doesn't notice my "sharp spot" I feel like a kid who has gotten away with something. Now, I just need to give the Doctor the sleight of tooth. when he comes in.

On schedule, she fires up the drill and cleans my teeth which isn't so bad, really. A drill with a rubber tip on it is kind of like an idle threat. All the noise and none of the pain. Like I said, not bad.

And then the floss. Again, not bad. Of course my existing crown bleeds when they floss it, just like home. This doesn't seem right, though she assures me it's fine. They put it in, so I guess they should know. I just think that taking a working, albeit failing, filling and grinding it down and crowning it should yield something better than a tooth that bleeds when you floss it.

So Doctor takes over the patient once the flossing/flushing and air-shooting (what is that anyway?) is done. He gives me the all clear. Looks good except for the "new" crown that I've been putting off for the past 6 months.

At this point, I'm feeling guilty, so I tell him about the sharp tooth. He takes a look and guess what? Yep, it's a filling that needs replacing.

In the end, here's what my "preventative check-up" netted me.

I now have an appointment for August 14th to replace the "sharp tooth" filling that I should have shut up about. This appointment will undoubtedly involve the sadistic poking, drilling and expensive white filling mentioned above.

Then, at that appointment I get to schedule an appointment for my "new crown" (they make it sound all regal) which I actually have to have "pre authorized" by my health insurance, because evidently they need to make sure that they don't cover the $900 out of pocket that they never do cover because, well, because they're crooked insurance people, that's why. (Sorry I lost myself in that last rant. Where was I?)

Oh yes, and at that appointment, I get to schedule ANOTHER appointment, because everyone knows that you need a "temporary crown" while they send your mold out to central Tajikistan for its creation, a process that takes weeks evidently. Meanwhile you live with this "flat stanley" tooth that feels like you're biting down on a joke tooth you got at a magic shop. What's with that anyway? Isn't there an app for this?

And at that appointment they'll glue it on, and it'll be "too high" and they'll have to fire up the drill and grind away until I'm annoyed enough to say, "Yeah, that feels better".

All of this is why I don't like the dentist. A few years ago I had a woman dentist who was very good looking. Finally, I thought to myself, someone who will make going to the dentist a pleasant experience!

It just made me hate very good looking dentists too.

P.S. To those of you who are or know dentists, I realize they are vitally important and I thank them for all of the great advances they've made over the years. But I'm going to start lying more.
crown dentist drill Tajikistan