July 27, 2017
As has become tradition, I went to the Waukesha County Fair with my son Ben last Saturday. We've made it the last three or four years now, primarily to see America's stupidest human trick, the Demolition Derby.

There are many things that say Americana, but few that say it like the Demo Derby. It also says a few other choice words like roughneck, 'Murica and hillbilly, but Americana is certainly up there among those less flattering terms.

What drives us to this spectacle every year? I don't know exactly, but I think it has a lot to do with the lawlessness of it all. Where else can you back your car into multiple other cars and get cheered on for it? I mean, c'mon! Does it get any better? Not only do you get cheered on, but if you are effective and a little lucky, they give you a trophy and a cash prize to go with your now nearly non-functioning car.

Needless to say, Saturday's derby did not disappoint in any way. Because of all the rain we've had, it was a muddy affair, which made for some tough sledding at times, but for the most part, the drivers were able to navigate it. It certainly led to a lot of necessary high rev tire spinning which added to the whole experience. Some of these cars have torqued up engines that sound throaty and powerful. Nevermind that they look like, well, like they've been in a demo derby.

One of my favorite sayings painted on a truck was "Trucky McTruckface." If you remember the British polar vessel naming contest you'll get the joke. Ben saw it and pointed it out to me. I do have to hand it to these drivers, not only are they courageous and crazy, but they usually have a sense of humor about things. I mean, you crash cars into each other, what is not funny about that?

Almost as interesting as the spectacle itself was people watching at the event. Now, I don't expect high culture at these things, but it's always a little bit of a wake up call on what we've become as a culture. Most of the perimeter was surrounded with pickup trucks with lawn chairs and coolers full of watered down American lagers backed up to the snow fence.

Ben and I stood between a couple of these and had the pleasure of listening to the owner of one getting cranked up and yelling at the officials about a car that had been spinning his wheels for a few minutes. I guess this is a sport some people take more seriously than me. I've never been one for yelling at the ref anyway - but evidently that beer brings it out of people. 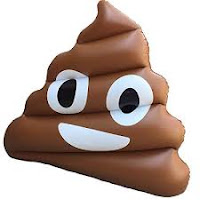 Then there was the nine year old kid holding the handle of a blowup emoji of a pile of crap (yes, they sell these, and yes, people actually purchase them) and bonking his younger sister on the head with it.

I guess there's just no putting a label on a scene. First we go to the moon, then invent the iPhone, then purchase and bonk people with fake crap.

Ben took a picture of the derby and snapchatted it with the phrase "Meeting of the Minds." It kind of summed up the whole event.

And while I was as guilty and probably as redneck as the rest of the folks just for being there, I'd like to think I'm above yelling at the ref and the whole inflatable crap thing.

That's where I draw the line.

Wait till next year!