July 30, 2017
A few posts back I mentioned that this has kind of become the summer of chasing aging rock stars. There was a realization that many of the rock heroes of my youth were dying off, and so to counter act any grief, I thought I'd try and be proactive and see a few that are in their 60's and 70's before they too kicked the rock bucket.

I knocked a few of them off my list in a single night at Summerfest a few weeks ago, including Soul Asylum, The Suburbs, Tommy Tutone and of course my personal favorite, The Church.

Last night was Roger Waters, formerly of Pink Floyd. Roger is 73 and the band has been broken up almost longer than it was together, but me, my son and my friend Ryan went because we're all fans and thought this might be one of the last chances to see him.

It is tough to put into words how amazing the whole spectacle was. When we got to our nosebleed seats, I was a little upset that there were big speakers hanging in middle of the sight line to the huge screen backdrop for the band. So much of their show is visual that I thought we'd miss so much.

Well, after intermission, they took care of that issue. 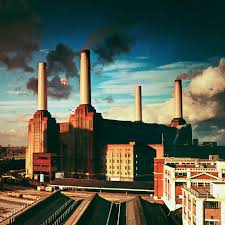 Down the center of the arena floor they unfurled a half a dozen huge screens. They projected the power plant image from their Animals album, complete with real smoking chimneys. The screens stayed up for most of the second set and served as a video screen to those of us unfortunate minions in the cheap seats. The imagery and special effects displayed on them was nothing short of astonishing.

Because I'm not terribly familiar with a lot of Roger Waters' recent music, I was hoping he'd play a lot of old stuff. Of course he did and it was, musically, spot on.

There was even a couple of moments where the backup singers, Jess Wolfe and Holly Laessig of the Indie band, Lucius took over the vocals and blew it out of the water. Ben turned to me and said he got goosebumps. I told him I was on the brink of tears.

Roger had his moments as well. It is nothing short of amazing to see a guy 73 years young, strutting around the stage, having a blast and singing songs from 40-50 years ago. He was genuine and appreciative of the reception he received, almost coming to tears himself near the end of the show.


Of course the show got political at times, and while I share many of his current political sentiments, it didn't detract from my enjoyment of the music behind it. Some were offended, some even left, but as he said in an interview, if you know Pink Floyd, you'd have known this was coming. Furthermore, if you don't want to be confronted with controversial images and subjects, go see Katy Perry.

There were Milwaukee kids on the stage for Another Brick in the Wall, Flying Pigs, Floating Dark Side of the Moon orbs, a laser pyramid and three hours of sonic thunder. It was phenomenal.

At the end, Ben and I both agreed that we were now spoiled for concerts for the rest of our lives. Nothing short of a 3D hologram could outdo the lasers, imagery and music of Roger Waters, 2017. And as a purist who loves the music first - and sometimes puts up with the message behind it, second - this was one for the ages. I'm glad I made time for it.