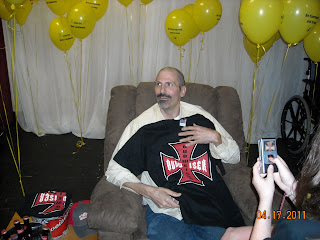 Yesterday (Sunday) was Rob's Celebration of Life Party. We arrived at Rob's house on Saturday, about 1:30 and saw that he was not having a good day. He had a fair amount of pain in his clavicle area and the lower part of his left lung. When he coughed, the pain seemed to be overwhelming. His oxycodone was not helping like it normally does. He didn't seem his usual upbeat self and we were all worried that he'd be in rough shape for the party.

It was not a good start to the weekend for me. I was hoping to find him sitting in his recliner, ready to talk and have some laughs, when in reality, he was never feeling good enough to get out of bed. We let him rest and he seemed to sleep from about 8:00 right through the night. We were all praying for a better day on Sunday.

Sunday was a clear, sunny day with a high in the low 50's. Not bad for April, considering we had driven through snow on the way up in central WI. Rob woke up and looked like a new man. He was upbeat, psyched for the party and finally eating again, after skipping dinner the night before.

While he was eating, his cousins on Janes side of the family came and decorated their driveway and yard with yellow balloons reading "Be courageous and strong. Live for Rob Landwehr." They then lined Rice Street with a balloon every quarter mile or so. It was so cool to experience.

When we got to the hall it was buzzing with activity. People were helping set up tables, balloons and the AV equipment. Paul, Tom and I helped get Rob's recliner onto the stage where he would sit, as his wheelchair gets uncomfortable after a while.

Rob showed up about 2:10 and for the first hour never got more than 10 feet inside the door. The greeting line started and it was a 1/2 hour wait from start to finish. Everyone got their pictures and got to catch up with him (in 3 minutes or less). Eventually he moved to the stage and the reception line continued there. There were over 350 people there and it was nothing less than overwhelming to see.

The party was for Rob, but I got so much out of it as well. I got the chance to catch up with family, cousins, friends, etc. that I hadn't seen in years in some cases. I had some great laughs with the McKasy's my step-family from so long ago. Their family is close to our to this day which is a great thing. I had the chance to talk to Don Landwehr, a cousin who I've corresponded with a lot lately, but not in person. Just a thrill to talk to some of these people.

Rob and Jane then had a few touching words for each other in front of the crowd. It was moving, and many people were brought to tears. Then, we sang happy birthday to both Jennifer and my mom both of whom had birthdays. They made mom a cake with a picture of her and the six of us kids in it from 1969 or so.

Rob then gave Jane and the girls some flowers and offered a toast to Rob. We closed the deal out with his tribute video that seemed to be a big hit. Again, there were many tears.


The silent auction was a great success too. Thanks to all that made that happen.
I cannot say enough about how happy I am with the way the day turned out. I feel it was God's doing that Rob felt well energized and able to make it through his day. Phenomenal, the whole deal. Amazing. Touching. Moving. Words cannot say.
Rob's closing comments when he gave his speech was that "Someday, if you behave, we'll meet again. This
is not goodbye, but rather, see you later."
He has no idea how comforting that was for me to hear coming from him.
Blogging off...