It Fell Into My Lap(top) 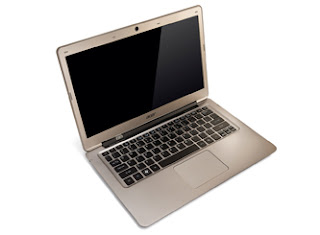 Once upon a time we owned an eMachines i333 desktop computer. We bought it from Best Buy in 1998 or so. It was running Windows 98, which was a nice improvement over Windows 95. (My son pointed out that every other release for Microsoft seems to be a dud. e.g. windows 95, 2000, Vista, now Windows 8.) It was not a good product, let me start with that. Ours blew a power supply shortly after the warranty that required a $75 fix from a computer repair shop. Eventually the CD ROM no longer worked. It was slow. I think we upgraded the ram from 128 MB to 384 MB that and it still ran like a dog.

Anyhow, we eventually wiped the hard drive clean and donated it to a non-profit. They in turn used it as a training machine, I believe.

Well, much to my surprise, last fall I got a card in the mail saying I was part of a class action suit against eMachines corporation. It turns out the floppy drives in the machines were prone to cause corruption to floppies. Can I recall if my data was ever corrupted? No, I can't. That's not to say it didn't because it was the source of much grief. A bum floppy write may have been part of those years, I'm not sure.

The deal with the suit was, because I had registered it on the website, they had my address, so I was one of the fortunate ones that was sent a card. The card said if I were to send in proof of my identity, I would qualify for either $62.50 in cash or $365 toward a new (refurbished) computer from a select website. I immediately filled out the card and sent it in, thinking a new (refurb) computer would be nice to have. Did I need a new one? No. Did I need a new, free one? Um, yes.

I waited for 6 months or so while the suit was settled. It seems they won the settlement (the plaintiffs) and so I got the redemption certificate last week. I jumped on the website that night and within an hour had ordered a new Acer Aspire S3-391-6046 ultrabook laptop. It came yesterday and is quite a nice little machine.

It is not without it's problems however. First world problems for sure, but problems.

First of all there's the whole Windows 8 thing. Having a hard time with it frankly. I bought the thing in the hopes that I'd grow to embrace W8 and, well, we're still at the awkward first date stage. I keep trying to kiss her, but all I get is a sweaty hand-hold. Maybe with time she'll become like an old friend, or maybe we'll agree to disagree and have an amicable split forever.

Why can't she be like her cuter younger sister, W7? Functional and cooperative. I don't want an app, I want a program. I get what they're shooting for, but when my first goal is to get something done that I've done a hundred times before, why must I feel like a 3 year old in a jet cockpit? I'm sure I'll master it, but it's going to take a while. I refuse to retrofit it with a Windows 7 look and feel (task bar with a start button, etc.)

Then there's a smaller, tighter, and slightly different keyboard. It makes me type like sadfae dwerwcf dklfadslew werafert, when I want to type more like this. It can be maddening. Add a dark room and it gets even worse. So again, a learning curve. Or, in this case, more likely that machine will be used for trips and emergencies. It is less than 3 lbs and so is really nice for travelling. Until those times, I'll stick with my Dell.

On a related note, my wife managed to pick up a nasty bug with here HP laptop. It required a factory restore with a backup of her personal files. The bad news is I had to do the restore. The good news is, every time I do one of these I learn a little something. The worst part is it's such a time suck. Loading the OS is one small part. You have programs and printers, and updates after that. Then there are the 10 little things you forgot, that come up over the next few weeks. Such fun. If home was anymore like work, I'd be getting paid for it.

I don't mind saving the day with my system restores and recoveries. I love messing around with computers. What I like more than that though is actually using them to do real work (like this blog, and my writing, and facebook, etc.) It's hard to do that stuff when you're futzing with backup strategies, endless scans and glitches.

I know the answer is "Get a Mac" (You know who you are, people.) and one day I may. (Put me on your Christmas list, people).

Until then, I have to believe the better answer might be get a pen.