September 03, 2015
I had my reading/signing at the Oshkosh Public Library last night. Donna was kind enough to come along and keep me company for the trip and to help me schlep books. She's been a real trooper when it's come to these events and I appreciate her for it. She's my rock. 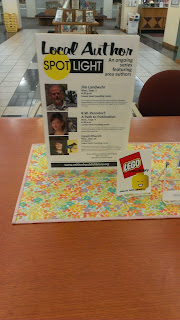 The event itself was kind of a bust. There were only about five people in the audience and I only ended up selling a couple of books. This comes on the heels of my past couple library events that were equally poorly attended. I was pretty down about it and the inner critic was starting to rear his ugly head again until I talked to a few people, and here's what I've learned.

1. My wife reminded me that every event is different and that you do what you can do, and there is no controlling who shows up. She also mentioned the good connections I made with the librarian and the writing group and that it was good practice for the future. I do love her for her support.

2. The librarian reminded me that Michael Perry, a bestselling author from Wisconsin, gave a keynote address at their Lakefly Writers Conference last year. In that talk, he mentioned that he's been through those tough times when you show up to a bookstore and 3 people show up. His advice was "Keep plugging away." That was refreshing to hear from someone whose made it in the business. (He also told the story of his reading in a Barnes and Noble where two people were sitting in the area where he was going to present. When they announced over the PA that Michael Perry's talk was about to begin, the two people got up and left. So, if it can happen to him, it can happen to me.)

3. My friend Brandon who I have coffee with every Thursday, reminded me that as an author, I am in the one percent of people in the world. And given that fact and the fact that I am living the dream, even when it only sells two books, I need to remember that I wrote a book. And I need to ride that reality for all of the joy it has brought me and realize that there's ups and downs.

4. I also reminded myself that it has been over a year since Dirty Shirt came out, and I am still pushing it. Many others stopped doing presentations/signings early on, but I have continued to pursue new venues. I need to cut myself a little slack.

My takeaway from the whole ordeal was that I still had a great evening with my wife (we had dinner before and quality time on the road,) and got to spread my book to one more community in the process.

It also jogged my memory to the time I got Michael Perry to sign a book after he taught a course at AllWriters one weekend. I walked out to his car, he opened the door and between his luggage, his band equipment and his books, stuff was practically falling out of his car. He looked at me and said,