July 01, 2016
More blogging from the road, or maybe tarmac is a better term. This time I'm in the Denver airport, which is beautiful if you're into malls and busy places. I'm not, but hey, I have an electrical outlet to myself tucked away from most of the main traffic, so I am happy. There is a great peace to anonymity for this introvert.

So, when I set up tickets for this trip, the only airline I could get a decent rate for along with an early arrival time in San Diego, was Frontier. I'd traveled with Frontier before, and didn't remember anything overly awful or traumatic about the trips, so I figured what the heck, how bad could it be? All flying is awful, so this couldn't be any worse, right?

My trip started out with a thud. I was supposed to leave Milwaukee at 6:30 AM on Sunday. Because the plane had technical issues in Las Vegas, it was almost 3 hours late getting out of Milwaukee. Fortunately I had a 3 hour cushion in Denver. 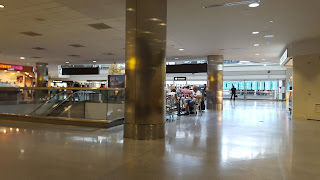 Due to slow departure, we didn't leave until 9:15. It's a two hour flight, and my flight from Denver was scheduled to leave at 11:19.

Now, I'm no math whiz, but I saw the writing on the wall.

The pilot was kind enough to hit the gas and we got to Denver at 11: 05. When he taxied to the gate, he got on the microphone and informed us that there was a plane parked at our gate and it would be about 10 minutes until we could deplane.

When I got at 11:21, I asked the gate agent if my plane had left for San Diego. "Oh yeah, that plane is gone, go ask the customer service agent to reschedule a new flight."

I moved down the line and the customer service rep said "No, your flight is still there, waiting for you to board."

It was difficult to believe that these two people worked for the same airline.

So I took off sprinting and just made it under the wire. They held the plane for the alleged luggage transfer and so we were slated to get into San Diego 10 minutes late.

Whew, that was close! Disaster averted.

The real disaster came when I found out that my luggage didn't make the flight. The execution of it's recovery was where Frontier clearly fell off my radar for ever using them again.

I was directed to a counter with about eight other poor saps whose luggage had the same fate. We were given scraps of paper (literally scraps of paper) and told to write our names, addresses, hotels, and the color of our bags. The clerk then proceeded to re-ask us each of those questions as we stood there helpless.

When she asked the guy ahead of me for the hotel's address, I thought he was going to blow a gasket. He looked it up on his phone and then read it to her. Then she asked for it's Zip Code. I wondered if they were going to mail the luggage to us or what?

When it was my turn, I had all of that information handy and got the same questions, including Zip Code. I was told that my bag might be in on the 6:00 flight and they would bring it to the hotel, but if not, it would be on the 11:00 flight and they'd bring it the next day.

Evidently customer bags aren't as important as a good 8 hours of sleep for their van driver.

Later that day about 8 PM, I got a phone call saying my bag was at the airport. I asked if it would be at my hotel within an hour then. "No...3-4 hours," was their reply.

I assumed it was coming by camel, or perhaps one item at a time by a flock of carrier pigeons.

Then the agent asked me which hotel I was staying at. IT'S ON THE SCRAP OF PAPER, PEOPLE! I told him it was the Omni.

He asked which one.

Of course, I'm thinking, THERE IS ONLY ONE! It's the big tall one overlooking Petco Park. You know that right? It's where your baseball team plays. You can almost see both of them from the airport. 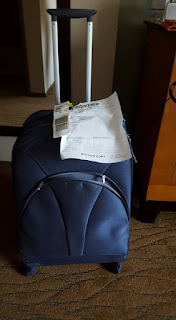 Instead I calmly told him the address again,

But wait, it gets better. Next he asked:

"And what's the Zip Code with that?"

Needless to say, I didn't get my luggage until 7:15 the following morning. But hey, it only cost me $30 to NOT get it on time.