September 21, 2017
Well, we rounded out the summer of chasing aging rock stars recently. About ten days ago, my wife, a friend and I went to Ravinia Festival in Highland Park to see Stevie Nicks. I have been a Stevie fan since I was a kid. One of my first albums ever was Fleetwood Mac's, Rumors LP. There was something captivating about her with her capes, shawls and her witchy demeanor. At the time it didn't hurt that she had the whole 70's hair thing going too. I admit, it was a boy crush. Still is, sorta.

So when we found out she was touring at 69 years old, we figured we'd better see her, because she's no longer on the edge of seventeen. More like the edge of seventy. At the time we purchased tickets, the only ones available for anyone other than a Forbes billionaire were "lawn seats." To add to the issue, these lawn seats are not even within view of the stage. Now there were big screens on stage, but even those were obstructed by trees/sight lines etc.

I don't mean to say I didn't enjoy myself, because it was fantastic. We had a gorgeous fall evening and the sound system they had out amongst the throngs of commoners on the lawn seats was really good. Stevie was in perfect voice, and was amazing even if we never really saw her face. It was a strange concert in that respect, but it was nice having our own portable table and cooler with adult beverages within our reach at any moment. 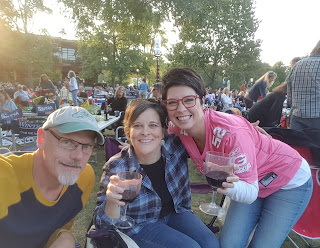 The Ravinia Festival grounds itself was a cool venue. It is set into a hillside, sort of, but not really like a really small Alpine Valley. But it is the lawn area that really makes it unique. People brought everything from tables with tablecloths to candles and even a few candelabras. It was as much a community music celebration as a concert. None of these other folks could see the stage either and they were all okay with it.

Stevie played a fair number of songs that were unfamiliar to us. We were all there for the greatest hits, and she hit many of those too. The highlight was the finale when she sang Landslide. I'm a big sap for songs like that and ended up in tears as I held my wife's hands. There was something about those lyrics that killed me. 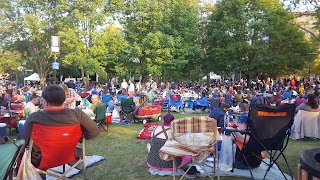 *Well, I've been afraid of changin''Cause I've built my life around youBut time makes you bolderEven children get olderAnd I'm getting older, too


With two kids in college and a now empty nest at home, these lyrics caught me off guard.

All in all, it was an incredibly memorable night.

And that's what seeing the last of the "Aging Rockers" in the Summer of '17 is all about. I can't wait to see what 2018 brings to the stage.