I know I beat the Thanksgiving drum on my last post and you are probably sick of hearing people's blathering words of gratitude, but based on the weekend I had, it is difficult to keep them to myself. 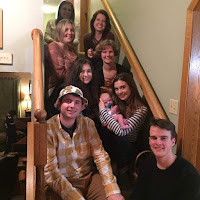 We went north to Minnesota to visit my family for the holiday and I came away filled with gratefulness for what we have built together. Much of this is the sap that I've become for connecting with people on a personal level lately. With all the crap going on in this country and the world lately, I find these moments with loved ones as little beacons of light in a sometimes dark world. They replenish me and, more importantly, restores my hope.

There were several connecting points with the family en-masse and in more intimate gatherings. The Thanksgiving feast is always good, a raucous affair with lots of food, laughter and memories. This one even featured a new baby - my niece's month-old son. But in some senses, the smaller gatherings was where we were able to really find out what's going on in peoples' lives.

In our family, we have a kind of weird tradition that goes back quite a ways. Me and my brothers Tom, Rob and Paul used to go down to the Spot Bar in St. Paul on the day after Thanksgiving. It was a time of brothers catching up, back slapping and revelry. The Spot is one of the older bars in Saint Paul and was always kind of dumpy. It was a blue collar bar where the only food were chips or a pizza ordered from a nearby pizza place. Over the years they've fixed it up a bit but it retains much of what I call "old timey charm," but what a health inspector might call a violation. It lacks swank, but I love the place.

Well, over the past few years, my some of the sisters and sisters in-laws and even a couple cousins have been joining the celebration. This year even my eighty four year old mom joined the fray. We all toast my brother Rob who would love nothing more than knowing his family was at one of his old haunts keeping the tradition alive. He loved that kind of thing and I know he was there in spirit.

Anyway, at the Spot I had the best conversation with my brothers and my godson/nephew Nick. I jokingly call it solving world problems because while we do a little talking of world affairs, we are well aware that none of what we say can change anything. At the same time it was positively therapeutic to hear from them that my feelings of dread with the direction of the country and the world right now are not just my own. Sometimes that helps to talk them out and try and keep doing what we are doing to make the world a better place.

When I mentioned to my nephew that someday (hopefully long from now) when my mom passes away, things will probably change with regards to our families getting together, he looked at me and said, "Why would ANYTHING have to change?" He went on to point out all that we've built as a family - everyone gets along, we help one another and it's kind of amazing. The weird thing is that is EXACTLY what Rob would have said. Both of these guys are gushing extroverts who love family more than anything. 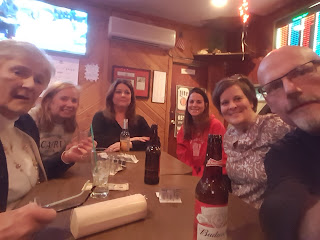 And frankly, I had a hard time justifying why things would change. I stammered and backpedaled and waffled. I said "It'll become a space issue," or "Mom is the glue that holds us together," but Nick wasn't having it. It reminded me so much of my brother Rob that it was eerie.

So I guess I can't say enough about my family. It saddens me to know there are people who don't have what I have. I wish I could clone it and sell it.

Anyway, the whole weekend was an investment in a fund that is paying serious dividends right now and it's all because we've got a whole lot of investors.