December 14, 2018
These past couple days have been one of connecting with an old friend, Pat. I've talked about him in the past. He and I were best buddies in high school and much of our college years. He was in my wedding in New York, and I was in his in Tulsa.

Over the years, as we were growing our families and living our lives we dropped out of touch. There was an occasional letter, and then an email, but for the most part we drifted.

This last reconnect was driven by a text exchange we had last summer. He was texting about how a Bob Seger song, Like A Rock, had a big impact on him one night on his deck. We'd seen Seger together in 1980 and, like our friendship, we just sort of lost touch with his music over the years.

Well, just for grins Pat looked up to see if Seger was still even alive. When he did he saw that he wasn't only still alive, but he was in the middle of his "Final Tour." Pat was always "spontaneous" so he pulled the trigger and got tickets for us, mine as a birthday present. 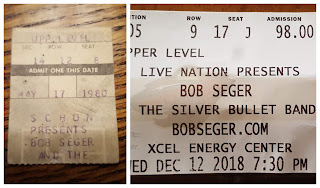 We found a lot right across the street from the Exel Energy Center. On an interesting side note, when we went to the show at the Met Center in Minneapolis in 1980, two tickets cost $24. This time, parking alone was $30! The two tickets were $258.00.

We went to dinner at Patrick McGoverns on West 7th and had a great time catching up with one another.

When we got to the concert, Pat was a little shocked at the age demographic of the crowd. He hadn't been to a concert in years, so was unprepared for the old, grey, balding crowd that made up 70% of the audience. I told him we might be part of that demographic, but I wasn't sure. Ha! 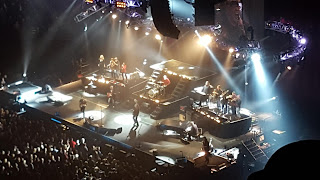 We found our seats which were the equivalent of where we were in 1980, namely, upper level about 5 rows from God.

The concert was awesome. I'd venture as far as to say it was better than the 1980 show, though memories fade things. Seger was in good voice and is still a great performer, playing acoustic guitar, piano and of course his gravelly vocals. As I said, I've sort of fallen away from his music over the years, but it was so great to hear the songs that I grew up with. This was a greatest hits show and did not disappoint.

The whole thing was just cool. It was a step back in time, with a foot clearly in the present. Both Pat and I have become brutally aware of the brevity of our time on earth, and we are of an age where you just don't let things like this pass by. You jump on them. We were both well aware that this $400 venture was a frivolous luxury. But we also knew that life is too short to miss something like this. And in doing it we created a memory we will both have and cherish the rest of our lives.

We might have both been part of that over 50 crowd, but for a couple of hours we were both 18 and carefree again. To some it probably seems sappy and nostalgic, but to me it was moving, powerful and epic. During my stay with Pat we talked about what we might have changed about how we grew up. We both kind of agreed that while we were not A students and not perfect kids, we were the best we knew how to be.

Our pasts shaped our present.

And our present is pretty dang good.