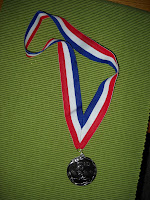 Last night was the last night of Boys Club at church. It also signified the end of my short lived career as a Ranger for Boys Club. It was a night of very mixed emotions. I'm glad to be done and moving on, yet at the same time am sad that my son is now moving on too. We've shared some great times at BC over the years, and I think I'm what I'm going to miss most is just being together for 3 hours on a weeknight. For all the joking I do about BC, it really is a cool thing, especially for a father/son combination. I wouldn't have changed anything about my experience with the boys.

We finished up with the awards ceremony where the boys get patches for what they've earned. Ben got patches for a number of things, including giving his testimony.

The highlight of his night however was winning second place in the Bike Rodeo a couple weeks prior. (See medal pic. above). He was grousing all night about having missed last week (ice-cream Sunday week) because he was sick. He snapped out of it a bit when he was called up for the second place medal.

I will miss my co-ranger and good friend Bob as much as anything. We complimented each other quite well as a team. He knows how to handle putting projects together and I'm better at the administration and lesson prep. He has a decent sense of humor and a great servant heart that I respect deeply.

All things considered, it was a bit like the ending of To Sir With Love where Sidney Poitier changes his mind about quitting his teaching job after he sees the incoming freshman running into the hall, goofing off and being disrespectful. I'm not sure I'm quite to that point, but I may go back to leading BC some day after a year or two sabbatical. Who knows?

That's all that I have time for tonight. More soon, especially on the whole skunk-under-the-porch debacle.

For now though, I'm Blogging off...