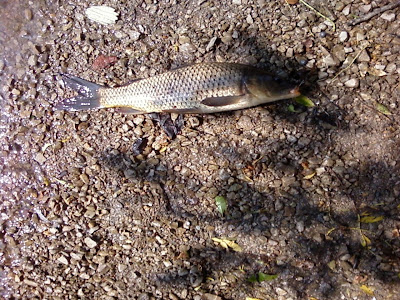 We had a busy, but awesome weekend this Memorial Day weekend. It started on Saturday with working on the skunk deterrent fence at the foundation of the house. I was working away on it and about 1/2 way through my buddy Steve showed up to help. There's nothing like crawling behind some pine bushes and having your friend drop bags of dirt down to you. Writhing in the dirt ducking sticks that threaten to scratch your head and trying to wiggle to the far end of the porch, just out of reach.

It was sweaty, dirty work, but it made all the difference having a second set of hands to help.

Good friends are not afraid to get dirty to help you out.

After that we tackled the back tree encroachment from the neighbors huge birch tree. Steve had an extendible saw that we used to lop off as much of the overhang as possible. There were some hairy moments on the ladder to be sure, but again, with one set of hands holding the ladder, and one cutting, it made the work lighter.

Good friends should not be taken for granted.

Then we had dinner and drinks and a ton of laughs along the way.

Yesterday we spent the day with the Barretts and Merschdorffs at River Bend Resort in Watertown. It was everything I'd heard about and was feeling the crush of the Memorial Day crowd. We had a good time, and the kids had a blast! Brad and I got out fishing and managed a single small carp on the day. Slightly better than no luck, I guess. But still a relaxing day fishing with a friend is my idea of a good time, no matter if they're biting or not.
Good friends are a gift from above.
The rest of the day was good too. We had some great food with the Merschdorffs and the rest of the crowd. The kids had a blast in the pool and just hanging with each other, drinking soda and laughing about whatever teens/preteens laugh about. Though there was no wildlife sightings, we did hear some noisy bullfrogs in the nearby fishing pond. We tried fishing there too, but had no luck.
All in all, it was a fun time. We're both recovering from it all today and have taken it very easy. I slept in until 10:07, which is unheard of. It felt good, and I must have needed it. I'll probably take a run later and try and get the lungs moving a bit. Need to work off some of the grilled food we had this weekend.
Right now though, I'm feeling the need for a nap. So I'll be blogging off...