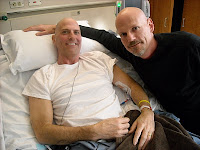 The rest of the weekend with Rob was good. I stopped over on Sunday morning about 10:00 and he was sleeping, snoring away. I thought I'd be sneaky and work on my laptop while he slept. As I was getting it out of my bag, he woke up saying "I smell coffee. It must be Jim." He knows me pretty well.

I had brought him a couple of muffins from the nearby Panekoeken House, but his lack of appetite made them unappealing to him. He didn't eat much all weekend, but later that morning he did force some french toast and sausages down. It has to be terrible to worry not only about eating, but about pain, nausea, pain relief for the hardware in his back, twitching legs, bowel movements etc. The man is a living testimony of patience and a strong will. I admire him unlike I ever have before. God Bless him.

We had some great, deep conversations when we were together. He is in a good place with his condition and more than anything doesn't want to be a burden on Jane and the rest of the family. I get that, but I wish he wouldn't think like that. We love him and will do whatever it takes to help him get back to normal; as normal is.

It was a great weekend really, as expected. These trips to Mayo allow me 1 on 1 time talking with him which is therapeutic for both of us. He has said as much. He has a lot on his mind and despite being exhausted we still were able to connect on a pretty deep level.

So the situation is that in 3 weeks they'll do a scan to see if the chemo is having any effect. If it is they will continue to treat him with chemo. If not, they'll move on to clinical trials. My prayer is that it is having an effect and we'll be able to put this thing into remission. I could see over time how the treatment (chemo) might become worse than the disease. It takes a lot out of him, and I would hope that he only needs a couple more, but I have no idea how this stuff works. Just praying for a miracle of some sort. That's all I can do.