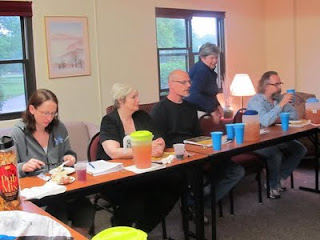 I spent last weekend at the AllWriters Retreat in Techny, Illinois. It was a great weekend, away from all distractions with large chunks of time where writing was the main focus.

I got down there good and early and settled in to my room in the "Maria House" dormitory where most of the weekend was spent. It was actually what made up the convent of the entire complex, which is quite large. The grounds included an enormous, beautiful Catholic Church that brought back many memories of the church I grew up in in Minnesota, namely St. Lukes, which oddly enough has been renamed to St. Thomas More. I'm not sure how or why they renamed it. It's a little like the abolition of limbo. How does that happen, just all of the sudden?  You take something that people have believed in for years and say, well, it never really existed after all. What? I would think that St. Luke would be a little hacked off by the slight, myself.

The grounds of the place were beautiful. There was a stations of the cross circle that was pretty cool. There were beautiful walking paths, ponds and fountains and a plethora of statues. A nice quiet, serene locale for some deep thinking and writing.

The weekend came off like this. Friday we had dinner as a group at a local buffet. Then we returned to Techny Towers for a kickoff/inspirational lecture on "Writing the Rough Stuff." This session was on how to write "rough drafts" as well as how to right "rough topics." Kathie did a great job and we finished it up with a collaborative poem exercise (see below). The night wound down until the wee hours with a social hour and music provided by Mario Medina, a gifted musician and a heckuva poet.

Saturday we had breakfast and then were given the whole day to free-writing. It was blissful. Some people spent the day in the common room, some outside (despite the cool temps), but I chose to stay in my room most of the time, so as to not be distracted. I got a ton of writing done, but kind of wish I'd had one more full day of writing.

That night we had dinner on-site and spent 4 hours critiquing each others submitted work. This brought us to 12:00 AM when most of us decided to retire to our little nun beds for the evening.

Sunday morning we had a light breakfast and hit the road running early with critiques from 8:00-12:00. After lunch we had a "liftoff motivational lecture" and a creativity exercise that was a lot of fun. Each of us was assigned a paint color chip with 4 colors on it. From this we were to use at least 3 of the 4 colors on it to describe a character in a 5 minute piece.

Once we were done with this we were dismissed.

I can't say enough about the weekend. The best part of it was being around other writers, many of them way better at the craft than me, who struggle with the same kinds of issues I do. Scene setting, dialogue, point-of-view, chronology, etc. It was weird having 14 people hammering me during my critique time, as I'm used to only 6 or 8 at a sitting (at the Wed. night class). I had some great chats with friends old and new, and an informative and helpful 20 minute consultation with Kathie, the instructor.

I hope to make more of these kinds of events in the future. This weekend brings the Southeast WI Festival of Books to UW Waukesha, so that should be a good start. I'm really enjoying my writing outlet. I'm meeting tons of new, interesting people and it's been really, really good for me.

The Queen Bee said…
That sounds great, Jim - what a wonderful way for you to be able to spend a weekend!

I didn't know that St. Luke's had changed its name either, till I read it here - how can they do that??? They didn't merge with another church or anything. This isn't right! I'm going to investigate this and find out how and why this happened. There should have been a vote or something. I mean, all you kids went to school there, I got married there the first time, Erin was baptized there...and on and on.
The neighborhood must be up in arms, not to mention all the "Luker" alumni clubs! I think this calls for an uprising of sorts, a coup maybe. Are you in, Jim? Maybe your experience in Madison was just the beginning of your new life as a rabble-rouser!
June 17, 2011 at 12:34 PM

bharat chandran said…
Hi, I am a first time visitor to your blog.. "being around other writers, many of them way better at the craft than me, who struggle with the same kinds of issues I do." - This is so true.. In fact I have never been around in a writers group, yet I feel that many of the other bloggers are way better at craft than me..:-)
June 20, 2011 at 10:35 AM

Jim Landwehr said…
Thanks Pat. I'm not sure how you just rename a church without asking everyone who's ever been a member. I'm not going to lead the charge though. I may have to face St. Thomas More in heaven one day. :-)
June 21, 2011 at 4:49 PM

Jim Landwehr said…
Bharat, thanks for your comments. I find it fascinating that someone from India came across my site. Be well!
June 21, 2011 at 4:50 PM