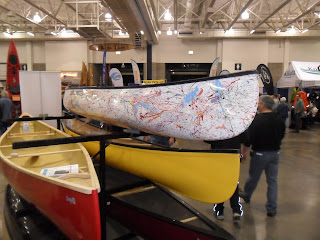 I spent most of Saturday at Canoecopia in Madison. It is pitched as the world's largest paddle sports expo, and after attending it, I don't know that I would argue. It was an amazing conference. They had speakers presenting all day over the 3 day weekend. There were vendors, demos and giveaways too.

I had originally planned on just going window shopping for Kayaks (if that makes sense). I've been thinking about getting one for about 3 years now, so thought that would be a good place to get some ideas. I managed to hook up with Bill Schultz of Wilderness Systems who was incredibly helpful to me, someone just getting started in the sport of Kayak fishing. He explained all the pros and cons of the SOT (Sit on Top) versus the sit-in, versus the Hybrid (like a one man canoe). He could speak to most of the models, in part because he had one of most every type.

There were two I was interested in, namely the Tarpon and the Commander 120. Bill seemed to favor the Tarpon, but when I sat in it I felt a bit cramped. I couldn't really stretch my legs out as far as I would like. When I sat in the Commander, it just felt better; felt right. I liked the fact that it was like a small, more nimble canoe. There is a fair amount of cargo space in the back as well as up toward the front. I opted not to get the angler package. I plan on doing a milk crate in back with PVC rod holders. I also plan to retrofit it with flush mount rod holders when the time comes. The whole boat weighs in at 72 lbs, but you can take the seat out and it's 6 lbs lighter.

Again, I hadn't planned on buying a kayak, but having people there to answer questions as well as a really good sale price helped me pull the trigger. There's something to be said for good customer service.

I also picked up a basic paddle from Bending Branches. I was shocked and awed to see that you could spend upwards of $400 for a paddle. At one point I had a carbon-fiber paddle in my hands that felt like a dream. When he told me it was a $180 paddle I suddenly woke up from said dream. I asked him for the next model down and he handed me a $120 paddle. Needless to say I came away with a "starter paddle" for much, much less. After all, you've got to be able to upgrade sometime. You can't always start with the Cadillac. Sometimes a Chevy works just as good.

Finally, I found a Malone Car Rack system, again recommended by Bill Schultz, that was a fantastic deal. It mounts to any existing SUV roof rack, so you don't need to go out and buy a $700 rack system from Thule or Yakima. That was a serious concern of mine when I was originally researching kayaks and racks. It should work out great and didn't break the bank.

I also attended a couple of decent seminars including a kindred spirit author of a BWCA memoir named Jerry Apps. This guy has taken trips with his son to the BWCA for 28 straight years. He had some funny stories and great pictures.

All in all it was a GREAT day! Fun to be around a bunch of silent sport geeks like myself. I'm definitely going back up next year.

In the short term though, I can't wait to get out on the water and catch some fish. 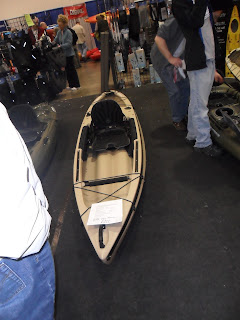