A Tribute to the Wizard 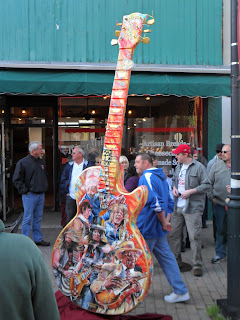 Just returned from Waukesha's GuitarTown Opening Celebration downtown. About 6 months ago Waukesha was selected to be a host city for Gibson's Guitar Town initiative. They donate ten 10 foot tall guitars. The guitars were then painted and decorated by local visual artists. They then place them in front of ten different businesses throughout downtown and the outskirts. It is modeled after the over sized Snoopys in Minneapolis, the over sized cows in Canandaigua (and Chicago?), and other cities. They will have a 3 year run and they take them down during the winter months to keep them from getting too weathered.

It was a cool event and should bring some much deserved notoriety to Waukesha. Our city's claim to fame for years has been that it is the birthplace of Les Paul , the "Wizard of Waukesha" and inventor of the electric guitar. 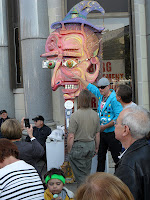 There has been talk of Ben and I taking lessons together, which may still happen. I took a couple of lessons with a friend when we were 19 or so, and it was hard then. I can't imagine it'll be any easier 30+ years later, but I'd be willing to give it a go. My stepfather always used to accuse me of having a "tin ear" and judging from my difficulty with tuning my guitar, I'm not so sure he's wrong.

Speaking of guitar heroes, a great one passed away this week. Doc Watson, a blind folk guitarist who could not only play the frets off a guitar, but could sing and songwrite too died at 79 years old. I can remember when my brother Tom got his record, I heard Wabash Cannonball, Walkin' Boss and Make Me Down A Pallet, and was completely mesmerized by the raw talent. 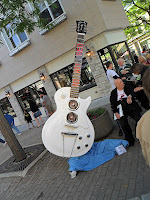 So, if you are a guitar fan, get to Waukesha. I've always said Waukesha rolls up the sidewalks at 8:00 every night, including weekends, but that is changing. With its Friday Night Live events, its Art Crawls, its bike races and other events, it's a GREAT place to live. After living here for essentially the past 25 years, (less the Milwaukee East Side black hole years) it truly has become my second home and I love it.

Come on over and see it for yourself because I'm blogging off...
Friday Night Live Gibson Guitar Town Les Paul Waukesha WI
Location: Waukesha, WI, USA