June 21, 2012
An Aside: To everyone who visited this blog in the past couple of days and got an error, I apologize. Here's what I tried to do. I wanted to move my blog under my main domain of writerjimlandwehr.com, thus making it appear as blog.writerjimlandwehr.com. Needless to say it flopped. I'm back now for good. Sorry for the inconvenience. 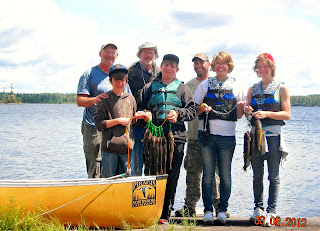 
We returned from a 4 day/3 night trip in the BWCA on Sunday. It's hard to put into words all the emotions I felt during this trip. Joy, sadness, elation, pride, fear, apprehension, love, exhaustion, and regret. The one I really did not experience was anger, and I'll take that any day.

It's impossible to run down everything that went on over the four days, perhaps I'll include some of it in my book. It was such a unique trip in so many ways that I would be neglect in not mentioning it there. I'll try and cover a few of the high points here.

Quality Time With Sarah and Ben
As I drove to St. Paul, I had 5 solid hours on the road alone with my kids. While Ben slept much of the trip, it gave me a good chance to talk to Sarah about everything under the sun. I rarely get the chance to talk about much more than work, the dog, or school to her for more than 10 minutes before one of us is distracted by the pull of a screen or a set of earphones. To sit there and listen to my young adult daughter talk about "what Mom is probably doing right now," or colleges she's thinking about, or her summer plans, was priceless. It was also nice to be able to turn the keys over to her in Menomonee so she could drive while I napped (with one eye open.) While the canoe trip was hard work, brutally hard at times, this time talking with my girl made it all worthwhile.

Staying at Jane's House
My sister-in-law is looking at selling her house, as it has become overwhelming for her. I don't blame her one bit. I always cherish my time in that house, and realized that this may have been the last time I get the chance to stay there. There were a lot of good times there.


The Portage From H*&%
We loaded the kids up with heavy packs - very heavy packs - at the start of our 3/4 mile portage on Thursday about noon. It was unlike the trip in 2009, which was a short portage where the kids were not required to carry much more than paddles and fishing rods. It proved to me that kids do grow up - they grow up to help, and if they're good kids, they don't complain. They don't complain even when they sit down to take a break and end up getting "turtled" like Sarah did where she could not get off her back. Luckily another camper happened by and gave her a 2 handed hoist to her feet. After a few more yards, Tom came by and switched packs with her. She made it the rest of the way and rather than berating us for overloading her, she laughs about the incident. It's one she'll probably always remember.

Nick's Exposure To The BWCA
My nephew Nick filled the role of the 3rd adult in Rob's absence and he seemed to really enjoy himself. Luckily he came with a great attitude and seemed well prepared for everything that was thrown at him. Being a military man, he was quick to act when things went south (rain, etc.) and was always asking what he could do to help. Being an ex-culinary student, he was helpful with meals and fish cleaning as well. We had some incredible laughs together and like my kids, it was great to have long, extended periods to talk and get to catch up with him. He's become quite a man.


FISH!!!
Over the 4 days we estimate we caught more than 80 fish between our party. This included a 5 lb bass that Tom caught and let my son Ben reel in. (What a great thing to do for a kid. Thank you, Tom.) It also included Sarah catching a 22" Northern, of her own, doing by casting a Rapala from shore. My niece Alison caught 10 walleye over the 4 days and Hunter (Tom's son) caught close to 20 fish, the biggest being a 19" walleye that I saw Tom accidentally drop into the water as he was tying it to the anchor rope. (His stringer was full.) Nick managed about 15 fish himself including a northern pike he got while trolling in the morning. He and the kids now have the "fishing bug" and to that I say mission accomplished.

Bugs
I can't say this was a high point, but I cannot deny that they were perhaps the biggest factor the whole week. When we arrived to the site, the skies above us were humming with mayflies. It was a black cloud. These are harmless, but annoying at times. A day later, we were blessed with the State's largest dragonfly hatch. This is really something to watch. A metamorphosis I'd never seen before. And of course, we saw mosquitoes unlike I've experienced since the trip of '79 when we went during the same time of year. June is not a recommended month to go into the northwoods. Just sayin'.

Tom Time
I can't say enough about my brother Tom and all he did to make us all comfortable in the tough conditions. Everything from making spaghetti in the rain (under a tarp) to morning coffee, to hanging tarps. He was always on the periphery, because he's so good at camping/fishing. He always has been a role model for me, a mentor, a friend.

Ashes
On Father's Day, we sprinkled some of Rob's ashes over the waters of Gabbro Lake. Rob requested that this be done as the BWCA was a special place to him. It's a special place to many of the Landwehr men and women. Each of us was given some to sprinkle as we saw fit, starting with his daughter Alison. The kids all took it with great reverence and I think it impacted them. I took the last handful of the ashes and threw them over the water. They left a white streak on the top of the water momentarily and everyone was silent for ten seconds. It was moving. It was spiritual. It was perfect. A perfect ending to a imperfectly perfect trip.

Now I feel God put us all there at that time for a reason. He made the struggle with bugs, heat, wind, rain and exhaustion, part of the wonderful journey to seeing our brother, our uncle, Alison's father in the woods once again. And he was certainly there, smiling that killer smile of his.

I miss you bro.