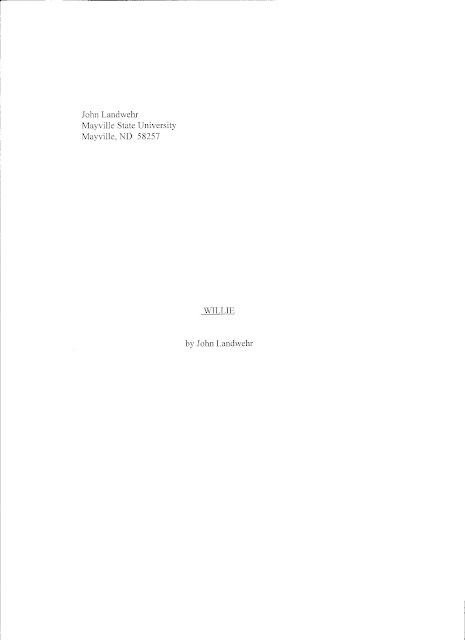 A couple of years ago after finding out that I've been working on a book, my older brother told me that my deceased uncle John (Jack) was a fledgling writer who had actually finished a book. Evidently he never had any luck getting it published, but details are sketchy as to how hard he tried, what channels he used, etc. I told Tom that I would love to see the book sometime and he finally remembered to get it to me when we all met up in Mercer, WI a couple of weeks ago. As a writer, I can fully appreciate the effort that must have gone into this manuscript. The countless hours of research and composition, all followed up by hundreds of edits. None of us knows what to do with it, so we are left to reading it and passing it on to the next family member.

The book is titled Willie. (Cover page above.) I am less than 1/3 of the way through it - it's over 300 pages long - but find it interesting for unconventional reasons.

The story takes place in St. Cloud, Minnesota in the early 1940's. It starts out with the main character working his way up through the family car sales/repair business. Early on in the book things go awry and he ends up taking a job out of state. The story is a bit on the slow side, but as I said, I find it engaging for other reasons.

My father and his siblings grew up in St. Cloud. He was one of 8 children by my grandfather Adolph John. The father in the book goes by the name is A.J. Because I did not know my grandfather very well, I'm left guessing as to how much of the character in the book is reflective of my grandpa. It's easy to see some of the tie-ins to other people and events that I've heard about, but I'd rather not make mistaken assumptions about the characters if certain elements were fiction. That is not fair to the people or the author in this case.

The name of the book is intriguing as well. I have an uncle Willie who, again, I don't know too much about. My dad's side of the family all lived up in St. Cloud for most of my younger years. Once dad died, (1967) we didn't get up there much and so I really can't say I knew any of my Cousins/Aunts/Uncles very well. I couldn't tell you what my uncle did for a living, or if his personality is rolled into the main character or not. Its interesting to speculate, but that is all it is, speculation.

At one point in the story he mentions one of the characters who married a travelling drug salesman. I know my father held down a job as a pharmaceutical salesman for a bit, and again, I am left wondering if this reference was made by my uncle to either pull my dad's essence into the book in some way or if it was strictly coincidental. I tend to think the former, but I likely will never know.

There are several other references that kind of raise an eyebrow for me, but not knowing much in the way of history on my dad's side of the family, I'm left to try and figure it out for myself.

This is part of why I am reading the whole book, as slow as it can be at some points. I don't have much to go on in regards to my dad or his siblings. I feel like I hardly knew Jack at all. He moved to North Dakota when I was in High School, so I rarely saw him after that move. At the same time, I have the nagging feeling that of all my uncles, he's the one I was probably the most like. By reading his work, I might get a better feel for what made him tick. I feel that, by reading it, I might get a glimpse into the heart of uncle Jack. In doing that, I may luck out and get a glimpse into the heart of my dad as a bonus.

Time will tell, but for now, back to reading Willie.

The Queen Bee said…
Funny Jim, but right before reading your blog, I was thinking about Uncle Jack (who will always be "Father Jack" to me!) and how you are very much like him. Then I go on to read the blog, and you wrote that you felt you and he were alike, even without really knowing him! Kindred spirit's .....!
November 7, 2012 at 2:53 PM

The Queen Bee said…
Funny Jim, but right before reading your blog, I was thinking about Uncle Jack (who will always be "Father Jack" to me!) and how you are very much like him. Then I go on to read the blog, and you wrote that you felt you and he were alike, even without really knowing him! Kindred spirit's .....!
November 7, 2012 at 2:53 PM