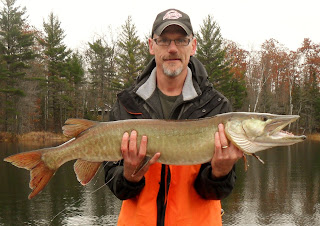 It's that time of year, mid fall, when I take my trip up north in pursuit of one of the greatest fish in the freshwater ecosystem. I'm speaking of Esox masquinongy, aka the Musky. I always look forward to this trip for a couple of reasons. For one, it's the last blast of fishing for the year. While I probably could get out once or twice more now that I have a kayak, I always look at it as my last chance on the water.

Secondly, fishing Musky has become my newest passion. It is so uniquely different from fishing for other fish, that I want to learn all I can about it; become better at it; catch a bigger one. As I describe in my account of my first experience, it is not so much like fishing for them as it is "hunting" for them. They are few and far between, these creatures, so you have to be crafty, incredibly patient, and a little johnny on the spot to get them.

They are called the fish of 10,000 casts for a reason. They're finicky and smart. It takes serious work to catch even one. The  lures are big and heavy. After a day of casting baits for them, I have pain/cramps between my shoulder blades. It's a working vacation in every sense of the word, but I love every minute of it.

Casting is usually fruitless, as we catch most of our fish by trolling with suckers, bait fish that are between 9-14" long themselves. Some people would be content to catch our baits. The fact that it is usually fruitless does not mean that I won't do it. As I see it, the more lines in the waters, the greater the chances of a fish. I actually caught small one on a lure two years ago, so that is part of the reason I keep at it. I'm obsessed.

This past weekend I met a woman (friend of a friend) who is more obsessed than me. It is her goal to catch 50 muskies in her fifties. She's 52 and has 24 to her credit, so she should make it. It was so cool to see a woman, especially one in her fifties that was as gung-ho as any man on catching a fish. She actually took her paddle boat out to re-position our suckers on their bobbers in the bay by her house. Now that's obsession.

The picture above is of the 41" fish I landed on Saturday 10/20 about 12:15. It fought like nothing I've ever experienced in my life. With the help and guidance of my buddies Steve and John, I got him into the net. It was exhilarating and a complete rush.

I can't wait to do it again.