January 15, 2015
So, I went to the doctor the other day. I know this is a sentence you never want to hear, and I'm not one who likes the gritty details of anyones bunion surgery or corn removal, but this was such a traumatic event, I thought I should share.

For a few weeks I was getting that feedback sound in my ears when I chewed or yawned. I was also having more difficulty hearing than I usually do. In the past when I've had these symptoms, I went to the doctor and they did an ear canal flush. I self-diagnosed my condition and made an appointment.

Now, because I'm sure my doctor has more important things to chase down on his schedule than a little ear wax, when I was offered the services of the Nurse Practitioner, I told them that would be fine.

When I show up for the appointment, I registered and was told to take a seat. Within 5 minutes a nurse called me in. As is usually the case, this nurse wasn't "the nurse practitioner".  This was nurse "lite". I don't know if she was an LPN, an RN in training or the administrative assistant filling in for someone who was sick. I figured no worries, because she's just going to weigh me and get my blood pressure anyways. Then I'd fall under the responsible care of "the nurse practitioner". No blood, no foul - in a manner of speaking.

Well she took the vitals from me using a height measurement that was an inch too short and a scale that was seven pounds heavy. Not a biggie, maybe I'm just not the person I once was - in a manner of speaking.

After that, she told me she'd take a look in my ears. When she did, she said there was blockage and that regarding a flushing, she'd "give it a whirl".

Now, I don't know if you've ever had an ear flushing before, but it's a little like putting your ear up to a fire hose and openin' 'er up.

They basically take a Windex bottle with a long pointy hose on it (and a nice splash shield to keep the water where it belongs, namely swirling around your cranium) and fill it with warm water. What follows next is when the fun begins for them and ends for you. 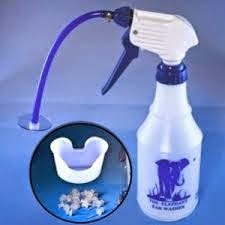 I was instructed to hold the drip-cup. Then, nurse-lite put the pointy end of the waterboarding bottle in my ear and just started blasting away.

It's hard to describe the sound this makes when one's eardrum is being pummeled with water travelling at the speed of sound.

It's a bit like someone taking an egg beater to your brain. At least that's what it feels like.

So as I slowly draw away from the ouchy-pointy, water-shooting torture hose, she follows my lead by pushing the tip further in to compensate for my leaning away. It now feels like I could probably reach the hose from inside of my other ear if I tried hard enough. I'm sure it was only at the surface, but it felt much deeper.

When I flinched, she said, "Are you having some pain?"

Well, I'm not picturing myself on a beach with an umbrella drink, put it that way.

"Oh, sorry," nurse lite said. She then proceeded to hammer away with the hose of death twenty more times. I couldn't help but wonder if she didn't have a bald, 6'5" relative in her family that she hated.

After she had pushed me to the brink of a Wednesday insanity, she looked in the ear and was disappointed in the results.

I wanted to say "Hey, you'd be kind of red too if someone took a firehose to you for 5 minutes straight, so cut my drum some slack here."

Oh, and no more whirls please.

The Nurse Practitioner came in and took a peak herself. After a bit more aural fire hosing, she took her magic light up pen/wax extractor and went in. When it was halfway through my skull, I flinched a bit.

"Oh, are you having some pain?" she asked.

No, on the way through my eardrum your device must have nicked my cerebral cortex on the "twitch synapse". No worries.

"Sorry about that," she said and kept doing it.

After the right ear was sufficiently cauliflowered, she did the same to the left.

When it was all over and done with, I could hear like a new man. I was sketchy on my middle name and current address, but the hearing thing was golden.

So, I've taken to getting some over the counter ear drops to keep from having to relive this auditory assault ever again. A few gentle drops every couple of weeks keeps the doctor away. Can you hear me now?