As Yet Untidy and Untitled

July 30, 2015
People have been asking me questions on my next book. What's it about? When will it be done? Are you going with the same publisher? Aren't you done yet? Etc, etc.

The book will be a creative nonfiction memoir about the house I grew up in during the 70's and early 80's. I believe what will make it unique is that it is centered around a six child, single parent family - for much of the book, anyway. (My mother remarried in 1979, after we'd lived in this house for nearly ten full years with Mom.) Because Mom had to work full time to support us, we were latchkey kids, largely alone before and after school. When we moved in before Christmas in 1969, we ranged in ages from 14 to 5. If you don't see the potential for some good stories given these variables, well, you'll have to trust me on this one.

I'm not sure how to structure or chapterize the book as of yet. At the moment, it's in a mind-numbing state of disarray. As you can see from the image, I've really just been capturing the stories as they've 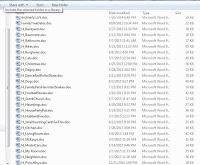 come to me. They are kinda, sorta by topic, but in some of these documents, I jump around or include parts of another story.

The good and reaffirming news is that most of the stories have been extremely well received by the workshop group at AllWriters. Most of them say good things and mention how much the stories resonate with their experiences and made them laugh. I've never really had "beta readers," before, so I consider this group to be my sounding board, my gauge as to whether I'm still on track.

I think at last count, when I went into each of the documents and added them up, I'm over 200+ pages at this point, so I have a good start. I'd like it to be at least as long as Dirty Shirt was (260 pages), so I have a little work ahead of me.

My only idea for chapterization at this point is to have each chapter take a room in the house. As a result, some will be rather short, and others much longer. Once I put all the stories into a single document, I will have a better gauge on if this will work. The way I work though, I don't want to do that until I'm closer to being ready to call it a "book".

Do I have a title in mind? Not really. I'm kicking around "House of Blue Lights,"  but am a bit worried about copyright, since that is a fairly well known song. For a short time I was considering "Keeping Portland Weird" based around a sign I'd seen on the show Portlandia that read "Keep Portland Weird." I think it is a bit to obscure, after all, I barely knew about the saying as little as a year ago.

I am aiming to have the book in good shape to start thinking about publication by the end of 2016. I am currently working on several other side projects right now, so the book comes and goes as the interest ebbs and flows. Maybe it'll be sooner, I don't know. I do know that I'm having a blast writing it and it hasn't taken on the "problem child" status yet, like Dirty Shirt did, but that will probably come too.

In the mean time, I'll dabble in poetry, flash fiction and short nonfiction stories for publication elsewhere. Knowing all the while that there's a bigger project in my future.

And it's going to be epic.