July 19, 2015
I am writing this from the JFK airport in part because I've always wanted to say I'm a writer writing from an airport in New York City on my way to California. Truth is it's because I'm bored, and I have a two and a half hour layover and can't sleep.

I wanted to write about our friend's goat farm in Clifton Springs, New York. It was our second visit in a year to this farm and I always find it to be such a happy experience. Our friend Jody and Rob have somewhere in the neighborhood of 20 goats ranging in size from a medium sized dog to some that stand four feet at the shoulder. 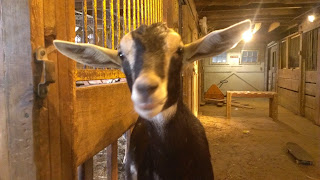 Jody is a fixture on Facebook with her silly goat pictures. She loves her goats like children and regularly dresses them up or "plays" with them in new and creative ways. I am jealous of her life. Being raised a city-boy, I was never around goats and farm animals, so it's always fun because I love animals.

I bonded with one of the bigger goats named, appropriately enough, Biggie. It seems Biggie likes getting his neck and ears scratched and took a liking to me. It was a weird animal/human connection for a bit. I felt kind of like the Goat Whisperer for a time. I now understand how Jody gets so attached to each of the goats (and the goat kids). They are simple, lovable, but smart, creatures. 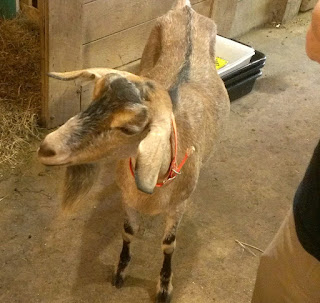 Being around these animals for an hour led to some observations.

It was a great experience, one that brings your blood pressure down 10 points just by being there. I'm sure we'll get back again sometime, but until then, I'll miss their playful and sometimes annoying personalities.