It is a crisp Saturday morning in October of 1973. My 7th grade intramural team, the Vikings, is playing against the Dolphins, a tough opponent with a nifty, capable quarterback. It is fourth down and long, and as the team's punter, I am called on to put us in better field position using my foot. I'm standing eight yards behind the center and wearing my fear just beneath my hardware store shoulder pads. Being an intramural league, my coach stands two yards behind me as kind of a poor man's helmet microphone; coaching by proxy. 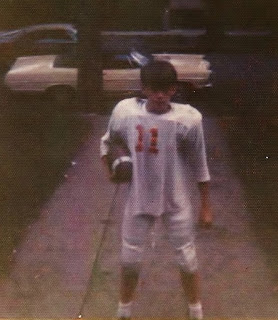 Through the bulk of my mouthguard, I shout out commands to our center. "Down. Set. Hut one, hut two!"

Every snap is different. This time, the center hikes the ball toward me, this time sending a low, wobbling semi- spiral. The ball hits me squarely in the hands, but for some reason after catching it they choose to relax for no good reason, and I drop the ball. On this day, God is merciful, and the ball bounces straight back up to me and this time I grab it and ponder what to do next.

My brain screams, "Kick it, quick!"

Meanwhile, two yards behind me, coach Seidel screams, "Run it, run it!"

My flight response kicks in and I take off, running to my left in desperation and in part because the right side has collapsed into chaos. Because the defense is expecting a kick, the young players appear confused. Why is the punter running the ball? As much as I can, I juke, dodge and drag players for eight yards before I am taken down in a cloud of dirt. A couple of my teammates come over and help me up, patting me on the shoulder pads, congratulating me for getting a first down.

First down? I was running for my life; running for daylight as coach Lombardi used to say.

It is a year later and the last game of the regular season for our eight grade team, the St. Luke's Spartans. We have only lost one game this year and are poised to make the first playoff run in many years. Nonetheless, my coach, Mr. Wescott, has chosen a few of us second stringers to be "starters" this week, and I am one of them. At ninety eight pounds, standing five feet two, I am playing defensive end, jittery with nerves, and anxious to show all the third stringers on the sidelines how it's done.

The defensive end's job is brain dead easy. One task. Box the ends and keep the play inside. The first couple of plays are up the middle and I do little more than dance around with the kid playing tackle on offense.

Then, on third down, it happened.

They ran a power sweep to my side.

As I "boxed my end" I stood there staring at a pulling guard and a blocking back, heading my way full speed with middle school violent intent. Behind them, the running back with the ball also running mad.

Just before impact, I close my eyes and am quickly pummeled to the ground by the runner's henchmen while he cruises past me to the second level of defense. The crunch of pads, ligaments and bone is loud and hard. I am completely aware that the runner is past me, but I manage to occupy both of his blockers in the process. Luckily our tenacious linebacker Tim Godfrey takes the runner down after a short gain.

The pain of the collision resonates momentarily throughout my entire torso. I get up spitting dirt between my mouthguard and my teeth. I now understand why we have mouthguards. I jog-hobble back to the huddle. Tim Godfrey meets my eyes and says "Good play, Landwehr."

"Thanks. I got steamrolled," I reply.

"You broke up the interference. Good job."

I think to myself, now there's a positive spin on things for you. One boys self evident failure is part of a team's success.

And that is when it occurred to me that, on a team, EVERYONE has a role to play. Even a 98 pound second stringer.

Close to twenty five years later, I wrote a letter to Coach Wescott. In it I thanked him for what he'd done for me that day. There was no good reason to start an undersized, inexperienced second stringer in that final game. I told him how much it meant to me even to this day. It showed me that a coach can have integrity beyond his W-L record. It showed me that he was paying attention in practice when I was giving my all. And it showed he knew what such a small measure can do to a kid's self confidence that could last a lifetime.

Thankfully we we won that day. We then went on to win the Twin Cities Championship for grade school parochial. And, personally, I think coaches in sports these days could learn a lesson or two from Coach Wescott.