October 29, 2015
My son Ben is going on a backpacking trip to the Porcupine Mountains tomorrow with a friend and his brother and father. After a single night in a tent, they are hiking in about 5 miles and staying in a "cabin" shelter that has no electricity or running water. It's basically just a roof over your head. It's a few steps above the tent, especially given as cold as it will be. 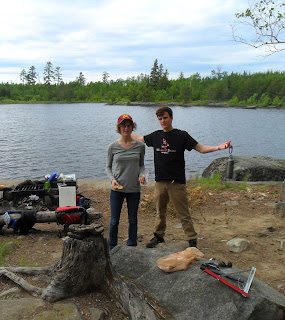 Carrie A Ryman said…
Ahhh... I think anyone who has loved someone else understands how you were feeling. We want/need to feel needed by the people we love most because it helps us feel valued and appreciated and are not worried about eventual desertion. I think everyone worries about that, as silly as it seems, especially in really deeply rooted, long-term relationships with others. I even feel a tinge of jealousy if my cats choose my hubby's lap over mine! Hahaha.

By the way, I love how your bare your heart and all its aches and fears, in your writing. You "go there," and it makes the writing all the more engaging and real. Thank you for sharing! You are awesome.
October 31, 2015 at 6:29 AM

Jim Landwehr said…
Carrie, Thanks for the nice comments, I always enjoy your feedback. I don't know how to write any other way. I'm glad it comes across as heartfelt, because that's what I'm striving for. Happy Halloween!
October 31, 2015 at 9:23 AM