January 24, 2016
Well, with the Packers again soundly out of the Super Bowl hunt, I can sit back and watch the playoffs and the big game without caring who wins anything. (I have my favorites and I do care, but ultimately, I don't care.) The game last week (vs. Arizona) was a thriller and as bummed as I have been in years past, this was no big deal. They weren't worthy of a championship, that much is sure, but they played their hearts out, so no shame.

With football winding down, I have found other things to keep myself busy. For instance, this past week I got to watch my son swim at his third swim meet. In addition to that I had the duties of keeping time on one of the lanes. They have "backup" timers in each lane in case the electronic scoreboard and touch pads malfunction.

As benign as this sounds, it was fairly stressful at times in part because the races were so close together. In any case, I only messed up once thereby negating my qualification for the 2018 Olympics. Ben did great again and I can't seem to get over how proud I am of him for his effort and perseverance this season. No complaining and 100% effort. 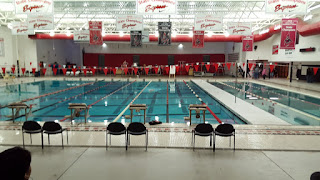 Of course winter is providing more than ample time to write. I'm 24 days into the poetry challenge and while it has been nothing but fun, I had a couple of other fun writing things happen yesterday as well.

I realize there's a day for everything these days, but yesterday was National Handwriting Day. A website called HandwrittenWork.com had a call for submissions of peoples writing samples with one stipulation - that it be in longhand. I do most of my writing on my laptop these days, but occasionally I write in notebooks, so I thought I would submit something just for fun. Well, they accepted it saying it was exactly the kind of thing they were looking for. So I have two poems up there now, Huffy (a 30/30 poem) and Remnants (new). Kind of cool.

Then, within an hour of hearing about that acceptance, I got an email saying another poem had been accepted for publication in a David Bowie Memorial Anthology. The poem is titled "Not So Major Tom" and the title is the only reference to David Bowie in it. But they liked it enough to include. It should be coming out around Easter. Again, kind of cool, and super humbling to be in such a great tribute. All of the sales proceeds are being donated to cancer research in Bowie's honor. So, his legacy lives on.

I've got a half dozen other submissions out there pending right now too. (Fingers crossed.) Additionally, I'm still enrolled in the Monday Night Allwriters Workshop. This group is so fun and includes everything from a few of people writing fiction, to a couple of women memoir writers. and even a woman writing a thematic cookbook. We have a ton of laughs every Monday and we keep each other focused and motivated. I love them.

January closes out this week, and I for one will welcome February with open arms.