May 22, 2016
Over the past few months I've been exposed to a number of new power tools. For example, last fall I had the chance to work a welder for the first time ever. (How many men can even say that?)  Because my friend Claude has one and is fairly proficient at using it, he let a bunch of his friends come over one night and try it out. Then, a few weeks later, the same guy gathered a few of us to help him cut down some trees. This exposed me to my first use of a chainsaw. (Many more men can probably say they've done that.) Both of those experiences were frighteningly rewarding.

Then, yesterday I rented a stump grinder from Home Dept. A few weeks ago, I removed our front bushes using a reciprocating saw, (an electric power tool providing it's own satisfactory feeling of power) which left four large stumps behind. After looking at my options, I heard that Home Depot rented these machines.

It was a big, cumbersome machine somewhere in the 8 HP range. Like all of these other machines, I'm convinced these kinds of tools are the product of some demented genius. Some guy said "How about we put a gas operated engine in front of a blade with wheels or a chain and see if we can't make this job easier?" Never mind that if used incorrectly these things are capable of amputation, electrocution, maiming or even death.

Because these things are capable of bodily mutilation, there comes a healthy fearful respect of the user. (At least with this user.) This particular machine was no different. It had a 9 inch whirring blade in front that is useful for grinding stumps, but also practical for creating stumps. Arm stumps, leg stumps and finger stumps. 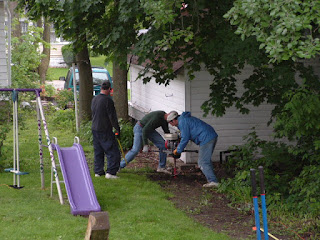 So I set about the job with that joyous dread that comes with any power tool that I feel is stronger than me. I worked the machine hard, causing it to blow blue smoke at times when I got impatient with how fast it was cutting and tried to cut too much/too fast. I had ear and eye protection and was deep into the exhaust fumes, sweating in the sun. It took about 20 minutes per stump and actually went off without a hitch.

The whole deal reminded me of another awesome tool I once used with my brother and a friend, the gas powered post-hole digger/auger. We used it in a driving rainstorm one weekend when we put up our fence. Three guys, noise, gasoline and a monstrous corkscrew. What could be better? It was an exhausting rush, and we all learned something that day; namely, never bury the auger too deep that you can't extract it.

It's hard to describe the adrenaline rush that I experience when I'm dancing on the edge of losing a limb or digit in the name of a noisy power tool for a time-saving task. All cases of them were life skills that I can check off the bucket list and add to my resume.

It almost makes a guy wonder what he should rent next?