August 28, 2016
As I mentioned in my last post, I was on vacation last week. It was our annual trip up to Pine Forest Lodge in Mercer, Wisconsin for a week at the cabin. This trip was different in that none of my extended family was able to make it up during the week we were up. While I missed having them around, it lent a different feel to the week in some cool kind of ways.
Some of the more memorable moments of the week include: 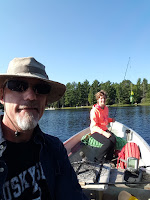 All of it made me realize that my kids are growing up fast. I hope they will want to come up again next year, but I know if they can't, we will all make it back up there someday. Pine Forest Lodge is a special place for all of us, and this trip was a reminder that as we all get older, it's important that we make time to be together in nature.