August 14, 2016
As I was helping my son pack for his camping trip to Devil's Lake this past weekend, we were rummaging through the camping bins when he came to a bin with my High School yearbooks in it. He looked through a couple to find me and after that he came to something I'd forgotten I kept. It was six years worth of my Pocket Appointment Calendars from my days at the University of Minnesota.

Why six years worth you ask? Well, I was part-time for a while, changed my major a time or two and added a double major near my Junior year.

But that aside, the bigger question is, why did I keep these? It has been 31 years since I graduated and the fact that I not only kept them, but moved them to about a half dozen residences is even more puzzling.

They are actually kind of an interesting peek into my life as an undergrad. In essence, they are like a micro-diary of 6 years of my life. While nothing is detailed, there are some notable and some not so notable events. Things like: 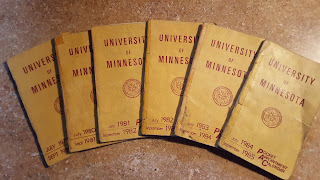 My college years created some of the best memories of my life. I will always remember them as being very rich. These little glimpses into those years help remind me how lucky I an to have had the experiences I did.

And to Karla, I'm sorry.