My Annual Round Of Golf

October 02, 2016
Yesterday I golfed for the first time this year. I am a fair weather golfer and usually only golf when provoked. I love/hate the game, mind you but I try and do it at least once a year to keep me loose, remind me of the etiquette and to keep the folks at the Nike ball manufacturing company employed and covered with health insurance.

My buddy Steve and his family organize what is known as the Greater Krey Open every year around this time. He and I share very similar stories in that we lost a brother within a few months of each other in 2011 to cancer. Every year, all of the proceeds from this fun tournament are donated to cancer research. This year they raised more than $3600 for the cause and I can only say I was happy to be a small part of it. 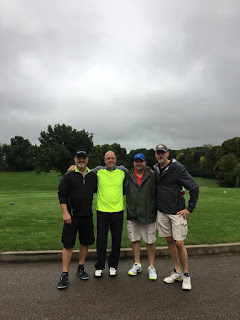 But that is just the background for the hijinks that go on once the first guy tees off. I've determined that what I like about this "scramble" tournament is that everyone on the team contributes. Even on my worst day I can still help our team with eight or nine good shots. I the big picture, that's nothing, but none of us is out to win the Ryder Cup here. Most of us are just trying to get out without losing a club along the way.

And, let me tell you, there is just a titch of smack talking that goes on. Just a smidge. Most of it coming from me. I try and keep things light and keep everyone loose.

By the second hole, my teammate Butch said he already had a ton of quotes that you'd never hear Tiger Woods say on the golf course. Things like:

"If that shot was straight, it would have been awesome."

"We finished two-under par, and I think those were your two."

Obviously, we don't take our golf too seriously. We all try our best, without a doubt, but we all recognize that this was a sport invented by some Scottish masochist who had too much time on his hands and a penchants for coarse language, mosquitoes and occasional strong drink.

I consider myself a pretty capable player at most ball sports, but golf is different. It is the great equalizer. Even the best in our group had some clunkers. At the same time, even I had a few moments of greatness. None of us is ready to quit their day job though.

So, I don't anticipate taking up the sport as a hobby real soon, but I really do enjoy playing it with guys who can take some decent smack talk or joking critique. A couple of times I was doubled over in laughter, be it at someone's shot, their comment after the shot or some snide remark from the gallery. There are parts of me that love being part of a team, something I haven't done much since getting soured on it during a softball league in like 1985 or so. (It's a long story, and I obviously hold things entirely too long.)

Ours is a team of duffers -like two Bill Murrays a Rodney Dangerfield and a Jack Daley thrown in to keep us honest. We're mostly about trying to not embarrass ourselves or the team from hole to hole all the while trying not to rip divots that are more than 4 inches deep. (and we missed that mark a time or two in the rain yesterday).

My nine iron looks like a scythe, but those divots weren't my fault. The rain was in my eyes.

That's my story and I'm sticking with it.