I just wish we had about three more weeks of it than we do. (Accompanied by 3 less weeks of winter.) 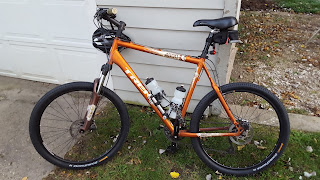 Today was a perfect, Indian summer day. Temps near 68, clear skies and a light breeze. Leaves were falling and everyone was in good spirits.

I took advantage of it and got two bike rides in. The first was an I-have-to-get-outside ride after church this morning.

But it was the second ride with my son that was the capper on a great day. We took a ride through Minooka Park which has a system of mountain bike trails that is a blast. We'd been on them once earlier this summer, but I thought today was too good to pass up.

The ride up and down the trails was both exhilarating and technically challenging at times. Ben even had to bail a couple of times when he'd hit a rock or a stump. Bailing (jumping from the bike) can be a lifesaver (or a limbsaver) at times and Ben usually ends up laughing at the end of his dismounts, so that is a good thing. 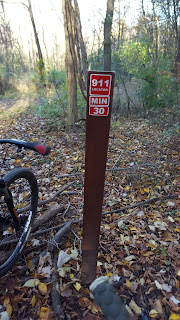 While the ride was really, really fun, it was the discussion during much of the ride that made me think how lucky I was to have him as a son. I don't want to give away all the details, but we talked a good amount about peer pressure and drug use in high school. Between hills and maneuvering our mountain bikes over rocks and roots, we had as frank a discussion about tough subjects as we've ever had.

And through it all, I heard some heartbreaking things about kids that he knows that are going down a bad path. The thing that hit me the hardest though was when he said he'd told a couple of his friends that he "cared about them" and that's why he was calling them out on some of their bad decisions. That is such a brave, adult thing to do at this age of peer pressure. It's so much easier to just succumb to the pressure, so when he told me what he'd said, it choked me up.

In a nutshell, what started as a quick trip through the trees, turned into an important dialogue about decisions, discipline and self worth. And I am so glad I made it a point to invite him to take a ride this day.

So, I guess my point is, never discount the value in a good bike ride with your kids.