January 12, 2017
I'm not sure exactly where we are in regards to the length of the winter season, but I'm going to call it the halfway point, for lack of a better gauge and not wanting to count days. Based on that declaration, I thought I'd give a quick assessment of how it's going - because you may recall an apprehensive post a few weeks ago about the coming cold and darkness.

In a nutshell, so far so good.

We have had a fair amount of rain recently and little to no snow. At this point, even the snow on the ground is almost all gone. This is a mixed blessing for me. I just happened to get new Cross Country Skis for Christmas so I would like a chance to use them. I joked when I got them that everyone could put away their snow blowers for the year. I was just joking, but so since that time all we've had is either rain or warm enough weather to melt it. 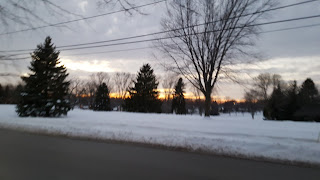 At the same time, I hate shoveling/snow blowing it, so I am okay with it not being here at all.

So it is a dilemma. Suffice it to say that I'll be totally okay with whatever happens from hereon out - snow or no snow.

Another reason I'm okay with the snow being gone is that it creates less problems for walking/driving.

Having said that, I have to admit that, yes, I fell yesterday. I know I shouldn't laugh because falls can be really bad - maybe even kill a guy. But whenever I fall, and it's usually once or twice a winter, I cannot but think of how funny it must be to the casual observer. Especially given my height.

Yesterday the sidewalks were all clear except for occasional patches of ice. Well, I took it easy over those patches and was almost to work when I went to change the song on my iPod and I hit a patch and went down in a heap. My hand hit pretty hard, but nothing else really was affected. My iPod went skittering away, and I got up as fast as I went down because I never want people to see me on my arse flailing about.

I think it was two years ago when I took a big time fall and messed up some tendons in my hand that didn't heal until spring. So, like I said, I know it's not a laughing matter, but I laugh when it happens anyway.

Today was slick too, but I was prepared and wore my Yak Trax. They look funny but so does a guy landing on his butt.

And so with my new found attitude, I'm just taking winter as a time to slow down a bit - to read more, write more and enjoy the good days (anything above 20 degrees) and tolerate the crappy ones (those 2 degree with -18 windchills.) Because, like my friend Paul said, there's not much I can do about it. Being pissed off about it doesn't help any.