January 05, 2017
We are in the midst of a bit of a deep freeze here in the Upper Midwest - not unusual for January, just unlikeable. It's the kind of weather where your car never really warms up and your dog who gets walked every night of his life looks at you like he'd like to go out even though you know he would make it about 40 feet and want to turn around.

Despite the frigid weather, it has been a weird week in a strange way.

New Years is always a time where I take stock of a lot of things in life. Sometimes I try and shake up my routine, but other times I just work on shaping my outlook. It keeps me sane in the darkness. This week has helped in some way because of a few small incidents or pinholes of light for lack of a better term.

The first happened a couple of days ago on Facebook. A friend of mine made a conscious effort to send out good messages about people close to him in his life. He did his mom and some of his friends which included me. I've only met this guy once, but we've been Facebook friends for quite a while. Despite only meeting once, he said some really flattering things about me.

Anyway, I thought it was such a positive, productive use of this monstrous time-suck we call social media that it caused me to pause. Why can't there be more of this and less political or derogatory mudslinging on the various social media outlets? Why is it that we as humans in our interactions always tend to spiral downward over time?

While I fully understand what he did was a very personal act and everyone feels better when they are complimented, it just caused me to wonder what the world would be like if we got more of that kind of thing on a daily basis. We carry enough baggage around without being reminded of it. What if we focused on each other's positive - and only the positive? What would the world look like - how different? I'd like to think I am doing my small part in this by keeping my Facebook posts positive. It's not for everybody, but it's my policy and I'm sticking with it. There's enough negative energy in the world, I don't want to be part of it.

So the second thing that happened is much less significant, but also happened on Facebook. I saw the following meme on a friend's page.* (Courtesy of Wholesome Memes) 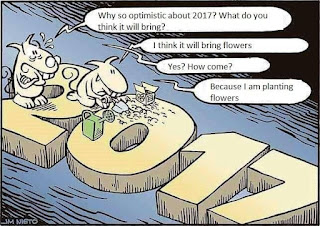 I don't know why it struck me, but it kind of gave me a sense of hope. That and the fact that if we all do our part, we're bound to see more goodness around us, even if it is just the fruit of our own doing. We are living in strange times, and I think the best defense against it is to keep from adding to the bad and maybe double down by doing some good. It's probably optimistically myopic, but again, it's going to be my policy.

The final thing struck me during coffee with my Thursday buddies at Cafe De Arts. We are working through a book by Peter Rollins titled The Orthodox Heretic. (Got that edgy title that this group is known for studying. LOL) It is a book of modern day parables. These parables all have an interesting and challenging spin on them.

The one we read for today was on accepting people for who they are, as ugly as that is sometimes. It went on about how, often times, we will do that as long as they adhere to our decorum of behavior, courtesies, etc. It was very challenging and spurred some really good conversation. As the three of us talked about it I thought to myself, here are two guys who are among the people in my circles that need to work on this THE LEAST of anyone I know, They are extremely good guys, very welcoming and would give you the shirt of their back. And yet they were being convicted of how they should be doing more.

Again, for some reason this was encouraging and gave me some hope. Is everyone working on things as heady and positive as this? No. But I aim to keep at it as part of my policy.

Because in 2017, I ain't planting no weeds. We've got enough of those.