March 16, 2017
I would consider myself a fairly active adult for my age. I fake my way through a 20 minute yoga routine every morning, walk or bike to work every day (3.2 mi. round trip) and do a fair amount of biking and kayaking during the spring-fall seasons. Winter is typically hard for me because I tend to dial my activity back and pack on a little winter fat. I might not show it, but trust me, I feel it. I carry around five to eight pounds every winter that I just can't seem to shake. Not a ton, but enough to make my pants annoyingly tight.

In an attempt to alleviate some of these issues and maybe keep the winter blues at bay, I got some new cross country skis for Christmas this year. I love to ski, but my old skis were just that, OLD.

Ironically enough, when I got them, I jokingly said that everyone could put away their snow blowers for the year, because it would mean no more snow - this prohibiting me from skiing. Well, it almost happened. Until this week, we've only had probably 3 inches of snow since New Years. So, when we got 6 inches on Monday, I wanted to get out on my skis.

Monday after work I did just that. The snow was fresh and the trails weren't tracked just yet, but it felt good to get out and schlep the old boards around a local county park. 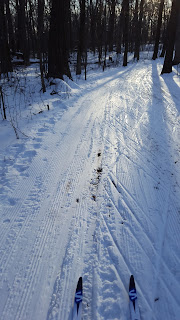 Now, I have a dangerous love of speed that is inversely related to my ability to control my skis. It's one of the reasons I gave up downhill skiing. I love the speed, but am a weekend warrior on the skill side of things. Put it this way, I feel much more in control at the top of the hill than I actually am, once I hit full speed. Especially if there's a turn or two in the mix.

I got out again today despite the deteriorating conditions. My wife's parting comment was "Don't hurt yourself."

To which I replied, "I'll try and not fall and break a hip."

The trails were in "fair" condition with patches of dirt mixed in along the trail to add another variable that I probably could have done without. But, as I say, at the top of the hill, I'm king.

As I started out things were going well. Oh sure, there was the occasional wandering ski, but those were easily reigned in with great deftness. Until they both wandered at the same time and I faded into the brush like a runaway logging truck. It's not a preferred way to stop, but it's effective.

After I checked to see if anyone saw it I backed out of the shrubbery and resumed my route down the hill - allegedly wiser for the wear.

Well, before long things got going a bit faster than I would like - even with my adventuresome spirit. Not wanting a wander into the woods like a few minute earlier, I went into full snowplow mode. It wasn't a full panic at first, but quickly devolved into one.

Now, when I used to ski with a buddy back in the day, he turned me on to a term "Yard Sale." In skiing, a yard sale is a crash which leaves skis, poles and other items strewn about like, well, a yard sale. He and I had a couple of them back in the day. 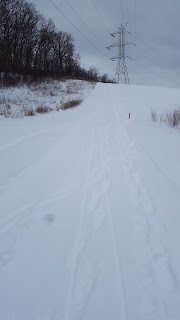 Today I held my first yard sale in a few years. Somehow the snowplow turned into a face plant. Luckily I turned my shoulder and made a bad landing slightly less bad. And you know what the first thing I thought was?

Of course I was fine and got up chuckling to myself and looking around to see if there were any witnesses. There were not.

In typical Wisconsin fashion, after three days of good skiing, tomorrow we're supposed to get rain/snow mix. This means I'll put the skis away and save breaking my hip for another day.

But for today, it felt good to be young.