July 16, 2017
As I mentioned in the previous post, I spent last week in Southern California - specifically, San Diego - at a conference for work. Every year 15,000+ people come from all over the globe to talk software, maps, apps and other GIS geeky kinds of things.

I also mentioned that this year would be different because I was going out a couple days early and bringing my son Ben along for part of it. I wasn't sure how things would go, particularly on the days I was at the conference and Ben was left to fend for himself in a strange city, 2000+ miles from home.

Let me just say that all my fears were unfounded.

Let me also say, that if any of you ever get the chance to travel one-on-one with any of your kids, DO IT! 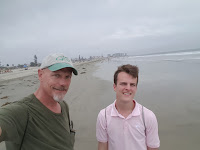 Now, to be honest, my wife and I have basically raised our kids in the back seat of a moving vehicle. With parents and family in two states, Minnesota and New York, it seems every six months we were packing up to go one direction or the other.

But with no offense intended to my wife, there is a completely different feel to a "boys trip," with just the two of us. I'll add that the same goes with a trip with just my daughter and I however. There is something about the one-on-one time with either kid, that changes the tone and openness of all conversations on a trip. I've experienced it taking Sarah to and from College and taking Ben to and from the BWCA for a book signing. I'm certain my wife would agree with my assessment.

There was so much we did that it's hard to try and summarize it all. Add to that the fact that it would be like sitting through someone else's vacation picture slide show, so I'll spare you that.

When I got back from the trip, I thought of our many shared experiences (in the best climate in the world, in my honest opinion) and came to realize that had I not taken him out there, I wouldn't have these experiences to laugh with him about in the future. 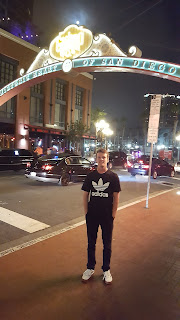 So I guess I did just subject you to a virtual slide show of my working vacation. At the same time, I did it to illustrate a point.

You see, I never had these kinds of one-on-one's with my own dad, for obvious reasons. So, maybe I'm a little more wispy or sappy than most about one-on-one quality time with my kids. Because life is short, time is precious and things change quickly. I think both he and I realized that this was a great chance to connect one last time before the commitments of college and jobs and girlfriends (for him, LOL) become the drivers for where his life takes him.

And I, for one, can't wait to see where it does. But until then, I'm going to snatch these moments and hold them tightly.