July 06, 2017
Soon I will be headed to San Diego for the 2017 ESRI User's Conference. This year will be a bit different though, as I am bringing my son, Ben for part of the week. We're headed out a couple of days prior to the conference to get in some sightseeing and down time before I hit the pavement running on Monday morning.

Ben has never been to California, so my wife and I thought it might be a nice high school graduation gift to have him tag along with me. Much like my senior year, he had plans to go out to the west coast with a buddy, but plans fell through. The difference is, I ended up going to the Boundary Waters Canoe Area and he still gets to go to California. That may be the difference between growing up with two parents instead of one. Or, maybe it's just because I happen to go out there every year. 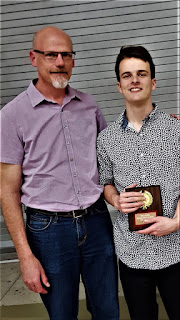 In any case, I am looking forward to spending lots of quality time with him, which I don't get to do nearly enough these days.

We were together the other day for a bit though and I laughed my head off. We went out to the Department of Motor Vehicles to renew his license and get a problem figured out with my license plate tabs. In case you didn't know, I am not a fan of the DMV, so as we sat there we picked away at everything that was wrong with the processes we were undertaking. I love his wit and he used it with frequency.

Needless to say, I was unable to resolve my problem. It turns out the dealership where we had the emissions tested didn't change the VIN number between the testing of our two vehicles. So, it looked to the DMV like we never had the Santa Fe tested, even though I had a sheet saying PASSED.

So Ben and I went back to the dealership and were told to wait in the waiting room. Like any good teen, Ben noticed there was a popcorn machine nearby.

"Do you think that popcorn is for customers or employees?" he asked.

"I'd say probably for the customers."

So, he wandered over to the machine and ended up coming back with a donut.

"Well, those donuts might be for the employees, but I won't tell," I said. We both laughed a little.

After he was done with the donut, he went up and bagged himself a bag of popcorn. When he sat next to me and started eating, I said "I hope they hurry with my emissions test, because they're losing money here with you hanging around."

He cracked up. Then I said that based on how long the test was taking, I'd give this dealership about a two-star rating. He said, based on the food, he'd give it five-stars.

I cracked up and his comment started a string of silliness that reminded me how much I like it that my kid is old enough to have an adult sense of humor. It is one of the benefits of making it through the high school years.

I love that we both get to laugh together at the ways, and the craziness and the absurdities of our culture and the world around us.

And I look forward to doing a lot more of it in the coming week.