August 13, 2017
My son and I went to an event called Bluesfest on Friday night. This is a relatively new event -the 11th year this year - held at Nagawaukee Park in Delafield. My friend Eugene Garrison and his band The Blues Harp Jimmie Band even played a set. I missed his time slot, but I've seen them before and they kick it!

My love for the blues goes way, way back to when I was a teenager. I don't know how I fell into them, but I probably owe a little credit to my brother Tom. He always loved Muddy Waters, BB King and a lot of the old greats. From there I took it upon myself and started my own journey of blues discovery.

And I found a few white guys who did it really well, like Eric Clapton, John Hammond, George Thorogood and Stevie Ray Vaughn. Something about the soul they put into the blues moved me to fall in love with the genre. 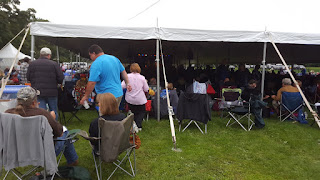 Then, these guys led me to discover the guys that influenced them. Guys that defined the genre like  Howlin' Wolf, Lightnin' Hopkins, Luther Allison and my personal favorite, John Lee Hooker. Not to be outdone, there are the female greats too like Big Mama Thornton, Etta James, Koko Taylor and Bonnie Raitt.

I can remember staying up late listening to the blues after hours show, hosted by a DJ named Alison

While the Bluesfest event was largely attended by the suburban, white over-50 crowd, I am of the firm opinion that the blues transcend all ages and social classes. Everyone gets blue once in a while. Everyone has a crappy day, a crappy week or a crappy spell in their life. It happens. And while you don't have to be in that bad place at the time, listening to the blues can help you work it out. Or, if not, at least they let you know that you're not alone.

One of the better concerts I went to was to see John Lee Hooker at the Cabooze in Minneapolis. It is a small venue, but John Lee blew the roof off the place. He was well into his sixties when he played and he killed it.

We got there in time to see Lil Ed and the Blues Imperials, a blues group from Chicago. They were really, really good. I'd won free tickets and didn't want to go alone, so Ben agreed to go with me after I promised we'd only stay for an hour or two. When we got there, he mentioned that Blues moves at its own pace, and I think he needed something with just a little more move to it.

Next year, maybe I'll make a night of it.