February 08, 2018
It seems full-on winter has finally arrived. We had a lot of that cold with no snow crap for the first two months, but last weekend we finally got enough of a snowfall to enable a little skiing.

I have been cross country skiing since I was 18 years old. In Minnesota is almost a mandatory skill - or should be, in my opinion.

So this past Sunday, before the Super Bowl, I took a little jaunt on my new skis that I got last year. It was a cold affair, but a beautiful windless day, so I had a blast. I am a fool for speed, so I even blazed the trail on the big sledding hill. I've long purported that I have a zeal for speed that regularly exceeds my ability to control the whole hurtling humanity element.

Well, after such a successful day on the slopes, I was determined to do a little night skiing tonight. I'd done some night skiing probably 15 years ago and enjoyed the quiet and darkness so much I thought I'd recreate it.

A few days ago when I mentioned that I was thinking about going out after work tonight, my wife said, "In the dark?"

"Do you have a headlamp?"

"Nope, but there's enough light. I've done this before." (The only thing missing was, "Trust me, I'm a professional.")

"Well, don't fall and break a hip or something."

Well, tonight was fun, but there were some moments of clarity and revelation, let me tell you.

For starters either my eyes are getting worse, or it's darker in the winter than it was 15 years ago. Or, maybe both. The hardest thing was keeping in the tracks. My eyes played tricks on me as I drifted in and out once the darkness hit.

It was almost like I could have used a headlamp or something.

Then, on my first challenging downhill I sensed the tracks were a ticket to too much speed, so chose to kind of snowplow it in the middle lane where the skate ski showoffs ski. Well, the middle was fast too. I had it all under complete control until I didn't. I fell in hip breaking fashion and managed to come out unscathed.

It was wicked fun.

I continued on, huffing and puffing to the next challenging downhill. Determined to master the center lane snowplow technique, I opted to go that route again. And 3/4 of the way into it I wiped out hard. This time I fell to my right side and as I was getting up I thought to myself:

Oh, please don't let my phone be crushed. (In case you're wondering, I carry it so I can call 911 when I break a hip.)

It wasn't which made this fall as wickedly fun as the last. 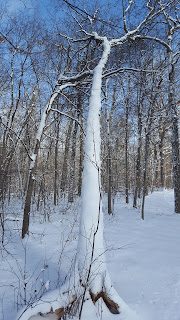 So, I have to do something about this need for speed. I aim to work on my technique of course, but if you're thinking I'd be better off staying home, I can only say it's not happening.

I would rather die from a broken hip from a skiing accident than sit on the sidelines worrying about the inherent dangers of a little bunny hill type XC skiing. I'm not dumb enough to get on downhill skis, maybe ever again, because that would be giving a flamethrower to a pyro. I know my limits.

Plus, for a few minutes, when I stopped among the trees in the darkness the quiet was soul soothing. I'm out there trying to make lemonade out of this lemon called winter.