August 30, 2018
So, seven years ago today I lost a brother after a long battle with cancer. He left behind a wife and two beautiful daughters as well as friends and a family that loved him. His legacy for me was to live life with a sense of urgency. 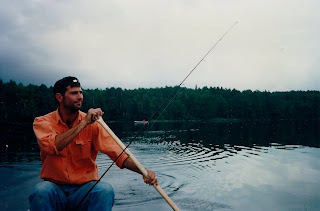 Our time is short.

His death also inspired much reflection and, as a result, some poetry. Here are a few that I've written about him and his life.


The Closer Side of Heaven*

You’re on the closer side of heaven
a lower stratosphere place
for the young ones
the strong ones
who can still climb.

I wonder what it’s like
on that closer side of heaven
near to God
but still near to us
left down here to wait it out.

Is it beautiful and stunning
this closer side of heaven?
Better than any earthly day
on the farther side
of our earth?


I await your reply.


One Cast*
My daughter wanted to catch a Musky
With her dad
Our family has a long fishing tradition
Her uncles Tom, Rob, and Paul all had a Musky
But only one
And she wanted to be part of it -
The Musky part


Now, Rob was in heaven
God called him there to help scout Smallmouth
Because He was having trouble Himself
Rob knew he could be a big help
But when he heard about Sarah,
He said to God, “Here’s the deal…
I’ll help you, if you help her.”

God dropped his jaw.
“But you know that just doesn’t happen.”
Rob wouldn’t budge
“One cast.”
“They’re the fish of 10,000 casts,” God argued.
“I caught a seven smallmouth yesterday…” Rob said.
“But she’s using the wrong line and no leader!”
“One cast.”

On the first cast
The wrong lure
Thrown with the wrong rod
Using the wrong line
And no leader (wrong again)
Hit the water with a splash
And immediately erupted
With heavenly Musky thunder.

Rob turned to God and winked.

This is my midlife

The memory replays over and overas I desperately attempt to relive it orreanimate it in some way.
A night at the cabin up northfishing with my brothersmall boat, minnows, a cooler with beers.
Fishing what we termed the “Dead Sea”we cast, talk, laugh like schoolboysuntil we can’t anymore – only one fish.
We bait our hooks with hope, tip our beersand share stories of life back home, work,the joys and struggles of young fatherhood.
He takes a moment to point outthe beauty of the water’s mirrored surfaceand says quietly, “Life is good.”
We bare our souls to one anotherand smoke cheap covert cigarsto the soundtrack wail of the loons.
Fishbone clouds, scarlet sunset, his laughterthese are what I recall – what I must remember –about that night – fishing with my brother.


-because he’s gone.
*From Reciting From Memory