I was a little too young to fight in Vietnam. I think my older brother might have had a draft card, but I can't recall for sure. I remember hearing that our neighbor a few doors down was caught at the draft office trying to burn draft cards, but again, details are sketchy.

I do remember seeing snippets of video on the nightly news. Soldiers walking through swamps with guns, Huey helicopters and battle scenes. They say it was the first war to come into peoples' living rooms...every night.

I also remember a protest march going from West to East down Summit Avenue sometime in '71 or so. I didn't understand enough to grasp what the marchers were marching for, but it seemed weird to protest something that we were supposed to be trying to "win," if that's what you call bringing a war to an end. 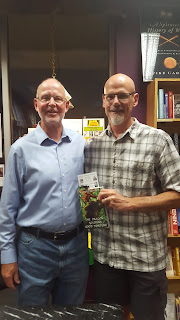 As the years have gone by, I've gained a deep respect for the veterans of Vietnam. These guys were put into an unjust, unwinnable war and when we withdrew from South Vietnam, many of them came home to angry, disrespectful crowds.

Along those lines, my wife read a powerful Instagram post by Elizabeth Gilbert yesterday about the War vs. the Protest. Check it out here.

Well, a writer friend of mine just wrote a book about his experience in the war. And while it is fictionalized, it gave me a good taste of what it was like being an unwanted stranger in a strange land. The book is titled "The Dragon Soldier's Good Fortune," by Bob Goswitz. It is a worthy read and I highly recommend it.

Anyway, last week Bob held his book launch at Books and Company in Oconomowoc. During it he mentioned he hadn't really talked or written about it in 45 years. But he thought it was a story that needed to be told, so he started writing. Many years later, he finished and had it published.

His launch reading and talk was riveting. A couple of times during it though, he had to stop because he was getting emotional. It goes to sho
w you that wartime experiences have long lasting effects, and this was no different. I was also humbled to see my blurb for his book made it into the print copy. 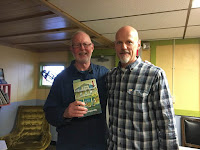 Bob and I go back a few years as he's followed my writing successes fairly closely. We've had coffee once and I will be interviewing him at the Southeastern Wisconsin Festival of Books in November. I am fortunate to know him and am super excited for his book release. I am also looking forward to hearing more about his story and his life.

And I'd be remiss if I didn't thank all the Vietnam Vets out there for their service. So, thank you!