November 01, 2018
It has been a four year drought since I managed to get a musky into the boat. This is despite great efforts once a year fishing hard for them for two straight days, and one or two other instances where I tried twice in a season during a second trip up to Pine Forest Lodge.

It is well known that they are hard fish to catch. Outside of sturgeon, in Wisconsin at least, they might be the hardest fish to catch of any species. They are hard to find and sometimes finicky when you do find them. They are the most active in Fall when they start their winter feed, so fishing for them often means cold, windy or rainy conditions. It is the price you pay for pursuing them.

Well, as many of you have seen on Facebook, this fall during what I call Muskyfest, I got one. 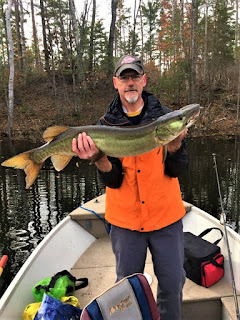 Let me preface it by saying that I would probably have zero muskies to my credit without the help of my friends Steve and John. Steve was the guy who initially convinced me to try musky fishing despite my reluctance as what I called myself; a "fair weather fisherman." Any fishing where you needed to bundle up like I'd seen in his pictures with the chance that you might not catch ANY fish, didn't sound appealing. But in 2009, I decided to give it a try.

And I caught one.

And to use a fishing metaphor, I've been hooked ever since. I went on to catch on for the next four years in a row. Then the drought started.

During it, for four years I cast until my arm was like a wet noodle, to no avail.

In fact, after the first day of no fish this year, I was beginning to wonder if I'd ever catch one again. I started to question my commitment to the sport. The old definition of insanity thing came up again and again, namely, "Doing the same thing over and over and expecting a different result."

But when this fish hit and the fight started, I realized it was ALL worth it. All of it. But first, the story of the catch.

So we went to one of our two favorite lakes (it's a secret) and after a couple of hours of casting I sort of dropped into my "inattentive reeling" trance. You do this stuff for long enough and it happens, your mind wanders, in this case to the Wisconsin Badger game on the radio in the back of the boat.

Midway through my 486th cast of the day, a fish slammed the lure. I set the hook with a vengeance and said "Fish on!" My two buddies were in their own Badger game trance and were kind of stunned by the statement. "Get the Net!" I said as I fought the beast toward the boat. 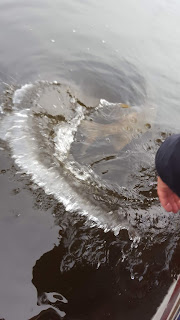 Now this time after the strike is something I refer to as 60 seconds of chaos. While I'm wrasslin' the fish, my buddies are getting stuff ready, reeling in their own rods and/or the suckers on bobbers in the back and generally, offering words of advice on what to do.

In other words, it is a one minute, full-on adrenaline rush.

Well, to their credit, they netted the fish. It was a 40+ inch, 15+ pound beauty. After unhooking it and getting a photo of me with it, they released it healthy into the deep to live another day.  These two guys are the ones who have my back whenever it's crunch time. They are the best of friends who know I would do the same for them (and have). Not to mention, they put up with my banter in the boat, which is sorta relentless.

And so, while any trip to the area is a good one - after all this is God's country - it is ALWAYS better to have a fish to my credit. When I first started musky fishing, I got fish for 5 years straight. Then the 4 year drought. Now I'm back on the board. Is it the start of another 5 fish run?

I sure hope so. And I aim to find out next year.